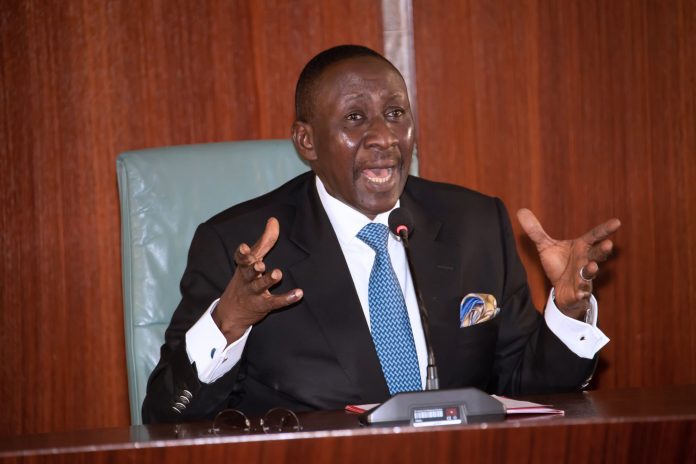 The National Security Adviser (NSA), Retired Major-General Babagana Monguno, at the 14th Workshop of the League of Ulamas, Preachers and Imams of Sahel countries in Abuja, emphasized the need to do away with faulty assumptions but reset international and regional strategies in the fight against terrorism in Sahel Africa.

Monguno in a speech on Tuesday at the Workshop of the League of Ulamas, highlighted: “Terrorism and the rapid escalation of violent activities by militant Islamist groups in the Sahel since 2016 have been primarily driven by the Islamic State in Greater Sahara (ISGS), which mainly operates in Mali and extends to the Niger Republic and Burkina Faso.

“It is bolstered by activities of groups such as Jama’at Nasr al-Islam Wal Muslimin (JNIM), the Islamic and Muslim Support Group (GSIM), and ISGS, which have continued to pose an imminent threat to the stability of the region.

“In Nigeria, Boko-Haram and Islamic State in West Africa Province (ISWAP) dominate terrorist activities, especially in the North-Eastern part of the country.”

Monguno decried that the security crisis in the Sahel has never been grimmer as extremist violence continues to spread increasing the number of Internally Displaced Persons (IDPS) and the rate of food insecurity.

The NSA called on the international community and its Sahelian partners to prioritise governance, cautiously pursue an expanded peace process through dialogue, and push for the adoption of more non-kinetic measures through affected communities.

Monguno expressed optimism that ISWAP have minimal opportunity to establish caliphate to rival Lake Chad Basin Commission (LCBC) countries, saying their activities have been curtailed by several military reinvigorated efforts of the countries of the region.

The NSA was of the view that both kinetic and non-kinetic approaches by LCBC countries to contain terrorism has yielded tremendous success in the region.

According to Monguno: “Thus, it is assessed that while the groups maintain the long-term strategic goal of creating a caliphate, the efforts of LCBC countries will continue to frustrate that goal.

“In that regard, it is imperative that ulamas, preachers, and community leaders in your localities key in to support efforts of our security forces, in order to end this menace.

“Just as collaborations between governments are boosting the advance of security forces in the fight against terrorism, alliances and group efforts like LOPIS should be the backbone to rebuilding our terrorism-infested communities. There’s no gun more powerful than enlightenment and education at the grassroots level.”