Dr Rabe Nasir, the Katsina state Commissioner of Science and Technology who was assassinated on Wednesday, has been buried. 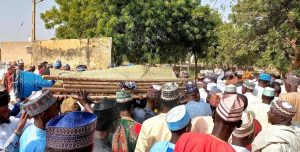 His body was interred at the Gidan Dawa cemetery after a funeral prayer led by the Chief Imam of Katsina GRA mosque, Dr Aminu Abdullahi Yammawa.

Special prayers were offered at the mosque for the repose of the soul of late Nasir, the security of the nation as well as for Almighty Allah to expose whosoever was behind the insecurity in the country.

Monguno said the delegation was sent by the President to condole with the Katsina State government and the family of late Nasir.

“The President has directed that I should lead the delegation on his behalf over the unfortunate incident that happened to a serving commissioner in the state.”

“Your Excellency, what happened yesterday, the discovery of the gruesome murder of Dr. Nasir is a very great blow not only to the people of Katsina, but to the entire nation.

“Man who has served diligently in various capacities to be cut short by the hands of evil and mindless people, it is something that of course has brought untold full shock and sorrow, not only to his immediate family and you as the governor, but indeed to all of us. It has brought home the reality of our time, the security situation which we found ourselves in.

“Of course, the nature of yesterday’s incident, the police has not concluded its investigation. But Mr. President has the confidence in the Nigeria Police will uncover those who perpetrated the dastardly act and the proper criminal justice and process of the law will take place on them.

Masari, said despite the banditry challenges that bedevil the state, the way and manner Dr Nasir was murdered is totally different.

“He was killed not by gun, but with knife, none of his personal belongings that is known was stolen. And the house was not broken.

“Like I said, what appears to an ordinary person is that, whomever participated in the crime was admitted by the deceased, or somebody who has keys that gives them access to him.

“But I know an investigation by security agencies would reveal what really happened. And I urge the public with any information about the incident, no matter how little it is to inform the securities.”

While appreciating the delegation, Masari said the president had called him on phone to console him over the incident, and he explained to him what really happened.