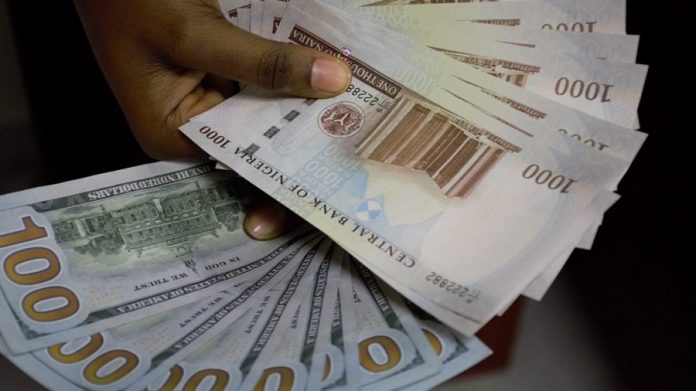 Nigerian currency suffered a serious beating at the black market amid rising foreign travels ahead of the holiday season.

A Bureau De Change (BDC) operator who pleaded anonymity, said Naira exchanged for the dollar at N574, compared to N562 it was exchanged on Wednesday.

According to the trader, the sudden collapse of the Nigerian currency was due to high demand.

He confirmed that most of his clients are coming from travel agencies looking to buy dollars for their customers.

The pressure on Naira at the black market can be attributed to the resumption of Emirates Airline.

Dubai over the years has remained a number one destination for holidays among Nigerians.

At the official foreign exchange (forex) market Naira was however able to resist demand pressure to close flat to the U.S dollar.

Data from FMDQ where Naira is officially traded shows Naira to Dollar exchange rate remained unchanged at N415.07/$1 on Thursday.

At the interbank market, CBN said the Naira depreciated yesterday against the American currency by one kobo to settle at N411.75/$1 compared with the preceding day’s N411.74/$1.

At the same market segment, the domestic currency equally recorded a marginal loss of 2 kobo against the Pound Sterling to sell at N543.06/£1 in contrast to N543.04/£1 it closed a day earlier.

Also, the Nigerian Naira depreciated against the Euro on Thursday by one kobo to trade at N464.08/€1 versus N464.07/€1 it was sold at the preceding session.