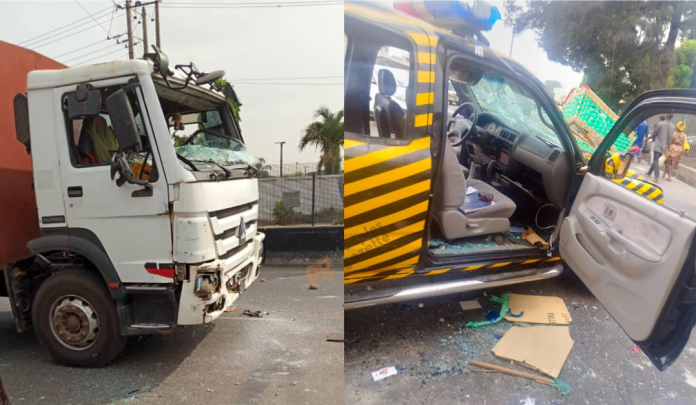 Education commissioner Folashade Adefisayo announced this when she visited the school on Wednesday morning.

Yesterday, a speeding truck rammed into some of the school’s students, killing two and injuring 12, according to the police. Some reports, citing eyewitnesses, put the death toll at 17.

Adefisayo said the government will, this afternoon, release an “explicit” statement containing an official death count and more details about what led to the tragic accident.

Reports claimed that the truck driver, who has since been arrested, was being chased by officers of the Federal Road Safety Commission (FRSC).

But the agency denied the claim, adding that its officers were called to the scene to save lives after the crash tragedy already happened.

Meanwhile, the Lagos Sector Commander of the Federal Road Safety Corps, Olusegun Ogungbemide, has exonerated his men from blame over the fatal crash that killed some school children.

It was alleged that the truck was running away from being arrested by officials of FRSC and Lagos State Traffic Management Authority (LASTMA), when it lost control and crashed into the students.

The FRSC in a statement by the Sector’s Public Education Officer, Route Commander Olabisi Sonusi, said “We want to place on record that our men were not in any way involved in the cause of the crash as patrol activities were not ongoing along that axis as at the time of the crash.

“The general public should disregard the disgruntled information being circulated by some unscrupulous element that FRSC men caused the crash.

She explained that “An articulated truck was said to have lost control at Grammar School Bus stop along Ogunnusi road, on Tuesday, December 7, 2021, which caused the death of an unverified number of students and leaving many injured.

“The men of FRSC were called upon by passerby to help intervene after the crash had happened.

“About seven of the victims were rescued and immediately taken to Lagos State Emergency Centre Ojota by FRSC personnel while another road user helped in carrying about seven also to the same emergency centre.

“The Sector Commander Corps Commander Olusegun Ogungbemide, however, wishes to commiserate with the families of the deceased, that God will grant them the fortitude to bear the irreplaceable loss. He also prayed that the injured will recuperate fast.

He, therefore, wishes to state that normalcy has been restored to the axis as security agents are on the ground to ensure free flow of movements for motorists,” the statement added.