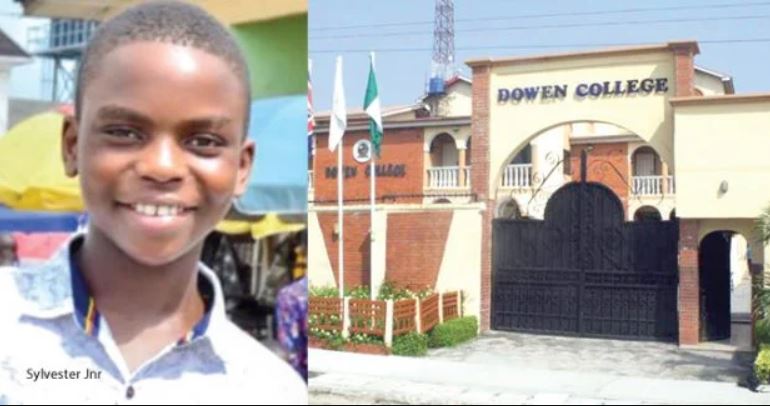 According to a report by SaharaReporters, a former staff and Guidance Counsellor of the Dowen College, Lekki, Lagos State, has stated that the number of house masters in charge of the school hostels were inadequate, adding that some of them knew there was a time bomb.

It was learnt that during a zoom meeting, the former school counsellor, who introduced himself as Samuel, spoke on the crisis rocking the school in the aftermath of the death of 12-year-old Sylvester Oromoni, a pupil who died from alleged bullying.

Samuel stated that he had noticed for nine years that there were not enough house masters to monitor the children.

He said, “My name is Samuel. I was a Guidance Counsellor for many years. I worked at Dowen College for several years and one of the problems we had was that the structures were not purposely built for boarding housing. I might be referring to Dowen College.

“A situation where you have several floors, and no floor has a house parent monitoring the students. By the time you hear a sound and you go upstairs, the seniors will change the story. That has what has been at Down College. From the first day, they moved the students out of the hired building into the permanent hostel. It was a time bomb waiting. Eventually, I resigned and went to (sic) because of that situation. The children are not monitored. And I should also add that.”

However, a woman interrupted Mr Samuel and blamed him for not speaking having known all these nine years ago.

She fumed that her own son also experienced what Sylvester Oromoni Jnr went through. The woman lamented that her son was battered, tortured and bullied, adding that everything Sylvester’s father said about the school was valid.

“I am sorry to say, why are you saying this now when a son has died? Why didn’t you say it before my child was bullied inside Dowen College? Why did you not speak out then? Now you’re talking. You knew this for nine years and you left the school. My son was a victim. They did to me exactly what they did to that boy (Sylvester Oromoni Jnr). They beat him, they were dancing around him. You keep quiet.

“What they did to Sylvester Oromoni, they did it to my son. They entered the room. They put off the light. They brought my son to kneel down. They put a bucket on his head. They were dancing around him like in an occult gathering. They were beating him. At the same time, they took out a phone and recorded it, that video is here.

“Mr Samuel and you are telling me you left Dowen because of the bullying. Why did you not say it then so that people like us would not make the mistake of taking our children there? I’ve been crying since Thursday since I saw this video. I’ve not eaten, I’ve not drunk; I’ve not slept since I saw this video. Our child has died. That boy was eleven years. It could have been my son that died. I was lucky. Sylvester wasn’t lucky,” the woman said.

She also mentioned some children notorious for this dastardly act including a particular staff.