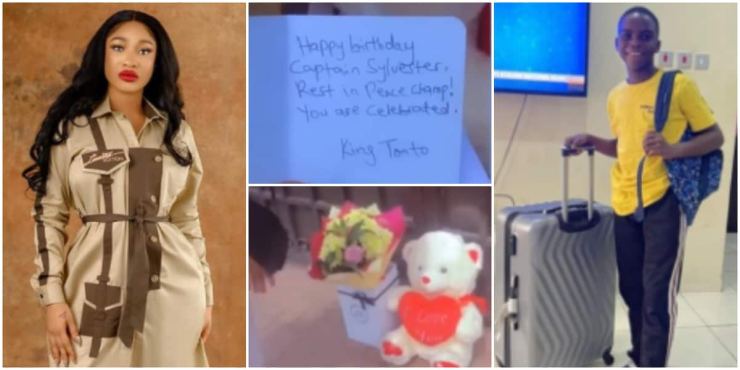 Nollywood actress, Tonto Dikeh has visited Dowen College with gifts to celebrate the posthumous birthday of the 12-year-old student, Sylvester Oromoni Junior, who was allegedly killed by his colleagues for refusing to join a cult group.

Tonto Dikeh had earlier taken to her Instagram page to appeal to Lagosians to drop a special note and flowers at Dowen College in honor of late Sylvester Oromoni, wishing him a happy birthday.

She wrote, “I woke up with so much pain. How do you lose a child in a safe zone and whose birthday is today? Sending love and light to Master Sylvester’s family and loved ones. Happy birthday young champ, we promise you justice. #justiceforslyvester.”

“@dowencollegelagos, we will be leaving flowers and gifts outside your gate. Because today is a child’s birthday that died under your care! Please, if you are in Lagos, leave a little gift and prayer at the gate of Dowen College. Thanks.”

“The crime was a horrible one but you have made it even more horrendous by lying to our faces or just plain ignorant of the affairs of your kids! Whichever way, we caught you and we need justice.”

In a follow-up video, a  man could be seen delivering Tonto Dikeh’s items including a teddy bear with the words ”I Love you”, a box of flowers, and a handwritten birthday card.

The actress, who was in the car while the man was delivering the birthday gifts on her behalf at the school’s gate, was playing a track of Michael Jackson titled “Gone Too Soon”.

KanyiDaily recalls that a cousin of the deceased, Perrison Onomoni, who broke the news on his Twitter handle, had alleged that Sylvester was beaten to death by five students over his refusal to join their cult group.

Perrison explained that the boy was battered on Friday but later died on Tuesday after a series of tests and X-rays indicated that he sustained internal injuries.

He said that after Sylvester’s death, the school management had reached out to the deceased’s father and told him that his boy sustained injuries while playing football at the school.

Speaking with TheCable, the student’s father narrated how his son was tortured and fed a chemical substance for refusing to join the cult group, adding that the boy suffered liver enlargement due to congealed blood before his death.

Reacting to the allegation, Dowen College debunked claims that Sylvester was beaten to death by suspected cultists in the school, claiming that the deceased sustained injuries while playing football.

The Management of Dowen College insisted that preliminary investigation conducted by the school authorities revealed that there was no fighting, bullying or any form of attack on Sylvester.

The school claimed that one of the hostel parents reported that the boy was injured while playing football, and a resident registered nurse immediately administered first aid on him and later called the student’s mother to inform her of the situation.

Subsequently, the student complained of having pains in his hip and was attended to again, this time by a doctor and a nurse, and thereafter the resident doctor called his mother requesting that she come for him so that he could get further medical attention.

The school further said it had carried out a preliminary investigation before the boy’s death and confirmed that there was no case of bullying as no part of his body was broken or injured, adding that it has policies that are strongly anti-cultism.

The management of Dowen College had announced that the school will shut down its academic operations for two days due to the continued outrage tailing the death of the student.

But in a statement on Friday, the Lagos State Ministry of Education said the school has been shut down ‘indefinitely’ to allow for investigations into how Sylvester Oromoni died under allegedly controversial circumstances on Tuesday.

The Lagos State Government also sympathized with the family of Sylvester, noting that delegates had been sent to the school to investigate the shocking incident, adding that the state was indeed sad about this great loss.