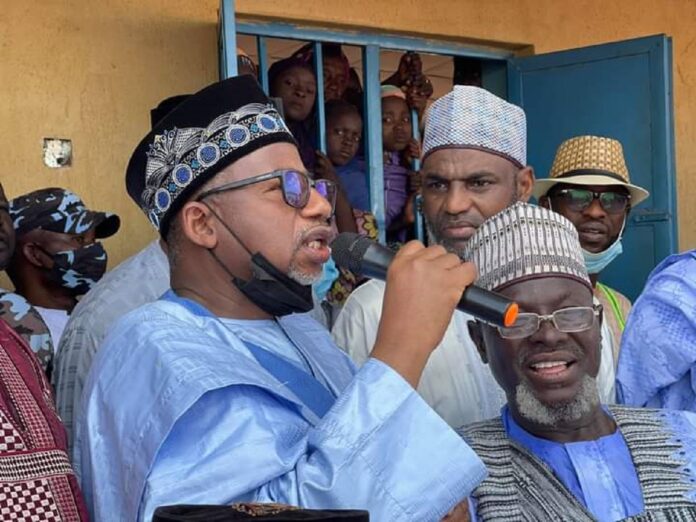 As the saying goes “the morning tells the day”. A leader whose pedigree shows his families determination and record of selflessness to the generality of the populace, Senator Bala Mohamed, present himself as a common man at the midst of the people especially the poor among the poorest in the society. A reason that made him accept the clarion called from the good people of Bauchi state to dumb his long career service as civil servant after reaching close to the highest zenith of the service.

Though, for those who fathomed or traced the Kauran Bauchi’s family his being a royal family, he was exceptional, focus and simple, who vowed and relates to the defined lower classes in the society, maybe that was the reasoned why the understands the chemistry and plight of the masses, a dreamer of brighter future and optimism.

It is true power and position reveal the man to himself and to the people who are watchdog of one’s action, they test determinations, prestige and satisfaction. Given the chance indicates readiness and hopefulness from the electorates and well-wishers and admirers of good governance at different strata of leadership, this is the reason why Governor Bala Mohamed make himself a different leader through his actions and quick decision in charging the affairs of Bauchi state in the last two years of his stewardship against old odds of running the affairs of government believe to be one-sided and vagabond.

Immediately after, swinging to office bala Mohamed made himself an action governor not a fancy, or Abuja operating governor as done by his predecessor. A movement that gave him the chance to penetrates the nooks and crannies of the state along with stakeholders from each locality to point out areas of necessity of prompt government intervention especially a place where at least 2000 people are living in the place. Against successive governments whose priority is the capital city and the headquarters for eye-service project.

Having, establishing himself as history maker, Bala Mohamed applies the same techniques he used in Abuja to remodel Bauchi state to a new mecca of northeast. Though, he came with his blueprint, a thing that changes his leadership acumen with others, who mostly came on board without plans of action. the first thing he did on the same month of may29, 2019, was implementations of various transitional reports recommendations and suggestion. Accordingly, the people of Bauchi state affirmed and testify the governor’s selfless leaders as an example to those who thought money would freely be shared or given to people without justification of the funds meant for execution of vital social services.

Bauchi state has now change its facelift from the four major boundaries linking the state, viz; Gombe, Yobe state and plateau state and jigawa states. Long qualitative road projects are going on with standard bridges in case of eventuality in the future. In a while, in the capital city of bauchi state model roundabout are being constructed to cater and accommodate the urban renewal roads projects with modern street lightening systems, these according to he governor will ease the gridlock, expands the state from being developed within a  particular portion of the state to a more a reasonable place of business especially now that the state has the highest number of influx trooping to the state based on the relative peace and hub of tourism. Additional bye-pass roads were fully constructed and commissioned by one of the mosr admired former president Goodluck Jonathan, out lof which one was named after him after years of expectations. It is unarguably Governor Bala Mohamed; make a history being the first governor of the state to constructs over 44 roads from within and outside the state despite dwindling economic crisis.

Provision of long awaited Water supply across the state that has trple population against the initial establishment of the famous Gubi Dam that supplies water to the state and its environ in 70s, a development that impact on 1/3 of the state households, a setback that negatively contributed to water-borne diseases, amongst others. Born of desire and will to improved welfare and ease way of life among diverse areas of the state, Governor Bala Mohamed focused and support the world bank projects of water expansion throughout the state to cushion the hardship continuously experience by the people whose votes count on every elected government shouldered with the responsibility of addressing critical matters. It’s now on record after several years of neglects by previous administrations; the incumbent government made it its priority to ensure constructions of more Dams, expansion of water pipes to the newly developed areas, and adequate provision of drinking water in the state with hardship. This development reduced the huge amount of money used in buying hawking water tapped /fetch from a dirty sources that contributes to the outbreaks of many unwanted diseases that sometime lead to loss of lives.

Replacement of motorcycles with tricycles is another, giant stride that should be commended considering the daily reported case of death and accidents. These lead to massive distribution modern vehicles to curtain the raising case as well as providing a less-accident free capital roads filled with cars and tricycles only with pedestrian ways created designed to provide avenue for non-motorist and children risking their lives on daily basis trying to cross roads. The idea of banning ‘okada’ business has so far reduced the rate of crimes committed and recorded over the years as it appears to be the commonest and simplest means of invading communities and individuals set on target.

In the areas of education, recent statistics and revelation from the national bureau of statistics shows bauchi state top of the state with number of out of school children to 1.2million approximately, but, there is a reduction ratio against what the government inherited from the MA Abubakar’s administration before quiting power in 2019 when it was approximately 14 million ratio. It quite sad! The Bala Mohamed led government made it to be part of its priority to reduced and brought new policies that would meet up with the global educational standard, first, the government identified poverty, negligence and other issues are the contributing factor the retards the government effort to improve there wellbeing. After identifying the problems which includes poor learning environment, lack of teaching aid, quack opportunistic element parading themselves as teachers. Governor Bala begins with the constructions of additional schools especially in the local areas where most criminal activities birth itself due to ignorance and wider constructions to the needy communities to ease and make education free for all against the odd. Today not fewer than hundred schools have been constructed, government is promptly paying its counterpart funds to support the education plus modern learning tools were widely distributed, this is the reason why bauchi state remain the most educated state in the northeastern part of Nigeria and the rationale behind the peaceful coexistence of people living in the city of Bauchi based on the political WILL, put in place to fulfill the desired of the people.

On employment vision, Governor Bala Mohamed, realized the state’s quota have been grossly underused in federal establishments and appointments. Inaccessibility to information debars Bauchi state from benefiting adequately from the federal character. Wrong and unproductive persons, even spent horse and laggards occupying positions meant for core indigenes of the state. After compiling a such information and prompt submission to relevant authorizes , Bauchi state indigenes have now been promoted in various federal ministries, more appointment were given to illustrious sons and daughters of the state from their denied quota including the juicy organizations. Aside from that different skills acquisitions programs were implemented plus support of huge amount of money to poor among the poorest to kick up a business as well as means of reducing over dependence on civil service and government in general.

Governor Bala Mohamed is no doubt moving the state to an Eldorado despite  global economic meltdown but he proves to the world that, a governor is the initiator and implementer of his lofty programs and history can only make itself if a leader made himself simple and accept the reality of issues on ground to find lasting panacea.  That justify the words of late president Yar Adua that “service to humanity is a service to God”. No wonder so the opposition party in Bauchi state appeared to be scared of criticizing the government because almost every sector of governance and have touched.