PUNCH During a crackdown on locals at the tollgate on Wednesday, Metro reported that security agents assaulted some demonstrators and journalists in various ways.

Some demonstrators and journalists videotaped some of the dramatic moments of the assaults during the attacks.

One of the films, which went viral, showed security forces, mainly police officers and LNSC officers, torturing Clement as he attempted to avoid being imprisoned in a Black Maria.

Despite his appeals for mercy, one of the cops smacked him while the LNSC official pepper-sprayed his eyes to prove his claim of being an Uber driver.

Security personnel, including officials from the Lagos State Traffic Management Authority, pulled away seized vehicles from the protest site, as our correspondent observed.

Clement, who expressed regret for his car being seized, told PUNCH Metro on Thursday that he was transporting a passenger from Ajah to a destination in Ikeja when he collided with security personnel dispersing demonstrators.

Clement said he and his passenger abandoned the car and ran for safety to escape being hit by stray gunshots, describing it as his source of income. 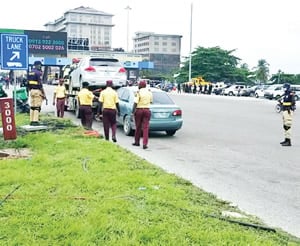 The victim’s car being towed away

He said, “I drive a green Toyota Corolla with the number plate, AGL 796 GW. I was conveying a passenger from Ajah to Ikeja when I suddenly observed people running helter-skelter, as the police were shooting.

“The guy said I should wait, so I had to pull over and park by the roadside. Immediately the guy jumped down, I also jumped down, locked my car and ran to the riverside.

“After there was calm and I observed commercial vehicles operating, I returned to pick up my vehicle, but I didn’t see it.

“I saw LASTMA and LNSC officials jacking a motor up. I asked them for my car and they told me to go to the front to ask.

“As I was going, a neighbourhood watch officer followed me to the Black Maria and they started saying I should enter.

“I want justice; when I watched the video (of my attack) inside my house, I cried because I am not a hoodlum.”

Nigerians, including celebrities, condemned the manner the security agents assaulted the driver.

A music executive, Michael Collins, aka Donjazzy, who reposted the video clip showing Clement being assaulted on his Instagram page, wrote, “Tomorrow, they will tell us no policeman sprayed pepper spray directly into a man’s eyes. #endsars @jidesanwoolu”

One of the conveners of the #EndSARSMemorial car procession, Folarin Falana, aka Falzthebahdguy, while reacting to Collins’ post, slammed the government as disgraceful.

“Disturbing scenes. Disgraceful government. Maybe they ‘ll say this one too didn’t happen,” he wrote.

Another supporter of the #EndSARS campaign, Debo Adedayo, aka Mr Macaroni, demanded answers from the state Governor, Babajide Sanwo-Olu.

He said, “Chief Security Officer of Lagos State @jidesanwoolu They are calling you sir. A lot of us have been dehumanized, brutalized and oppressed.

“You held so many events this past week sir. You said your government loves the youth and wants to support the youths. Is this the support sir?”

The General Manager of LNSC, Ifalade Oyekan, in a statement, said his men involved in the torture had been summoned for internal orderly trial.

When asked how Clement and other victims whose vehicles were impounded at the tollgate would recover their vehicles, the spokesperson for LASTMA, Olumide Filade, said he was going to get back to our correspondent.

He had yet to do so as of the time this report was filed.

The state Commissioner for Information and Strategy, Gbenga Omotoso, said the state Governor, Babajide Sanwo-Olu, would not tolerate anybody “who wants to do anything to tackle free speech.”

“He has asked the Commissioner of Police, Hakeem Odumosu, to apologise not only to the Uber driver, but to all the people who were maltreated on that day.

“I believe the CP has done that as I watched him apologising on television yesterday (Wednesday). I do not know whether people have been arrested, only the police can say that.”