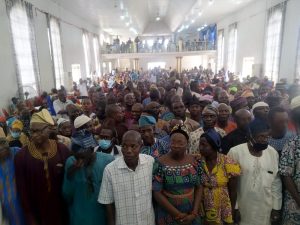 Tinubu ‘ll be next president of Nigeria, 16 APC governors are already backing his aspiration –

Adeyeye spoke in Ado-Ekiti, on Thursday, while inaugurating the factional executives belonging to SWAGA group across the two strata of the party.

USA companies need customer service reps to work from home, hourly pay in $13 per hour, must have a quiet environment to work, internet access.Click here to apply .

While addressing the factional APC and SWAGA members, Adeyeye said : “Asiwaju Bola Tinubu will be the next President of this country and one of us will become the governor in Ekiti State. I am happy that the new executives have passion for this group and this will lead to action and eventually victory for all of us.

“APC leaders and members across board are using their personal money to fund SWAGA. Members are not after money. Let me tell you this, 16 governors are now backing Tinubu for president and they are no longer afraid after Governor Babajide Sanwo-Olu of Lagos State openly supported us when we did the flag off in Lagos”.

Speaking about the strength of SWAGA in Ekiti, which he described as strong and intimidating in terms of membership, Adeyeye added: “We learnt that they wanted to come and disrupt this swearing-in today, but I said they can’t. Governor Fayemi wanted to conduct election into the House of Assembly in Ekiti East constituency one, they killed three people.

“That was how weak and debased our party is now. The current government can’t bring out a governorship candidate in APC and win in 2022. They have been rejected and SWAGA is coming to save the party from ruin”.

On the new parallel executives inaugurated by SWAGA, the former Minister said: “Those that were inaugurated today are the authentic APC executives in Ekiti. The party at the national level brought out a guideline that people should come out and queue to vote for the ward and local government congresses, but these people didn’t come out. They were inside a room concocting names under the guise of consensus.

“But SWAGA members filed out. We have the video clip that we will present. What they did on Saturday, October 16 was a nullity and a complete waste of time. We knew what we did for Fayemi to win in 2018, he couldn’t have won on his own, because he has no popularity.

“I know that they can’t buy you with money, you are for SWAGA. This government has finished, don’t let them deceive you with positions. Only the Fayemi’s Tokantokan group are enjoying the dividends of what we did, others are sidelined. It is now shop alone, die alone.

“Even many of those with appointments are aggrieved, many will shock them during the governorship primary, we are now using direct primary. They can no longer sleep because the party now wants direct primary, owing to the fact that they are not popular”, Adeyeye said.

The SWAGA State Coordinator, Prince Bamigboye Adegoroye, commended members for mobilising for the party despite alleged threats from some people, saying the group has become a powerful force to be reckoned with in APC.

“By the grace of God, all our struggles will end in happiness. This is the time for political struggle. Some of you acted like brave men today, if not, you won’t have been able to attend this occasion”.

The group’s Chairman, Ikere-Council, Lanre Adekungba, said they have worked for the party in the past, but without profit, saying SWAGA will be a departure from such harrowing experiences.

“We are using our personal funds to maintain this group, which shows that we are resolute. We will deliver the party in the primary. How many people remain with them, the remaining remnants, we will bring them to this group”.

The group’s Women Leader in Efon Local Government, Mrs Eunice Adeoye, said the executives should be more diligent and aggressive in mobilising for the group, to be able to produce governorship candidate for the 2022 governorship election.