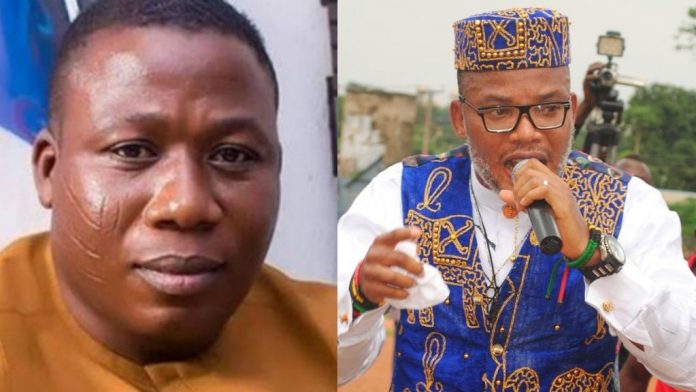 Some stakeholders in the Nigerian project have raised concerns that the administration of President Muhammadu Buhari has continued to raise suspicion of ‘hidden agenda’ in the court proceedings involving aides of Sunday Adeyemo, a.k.a. Sunday Igboho, leader of the agitation for the Yoruba nation; as well as the prosecution of Nnamdi Kanu, leader of the Indigenous People of Biafra (IPOB) at the Federal High Court, Abuja, Federal Capital Territory (FCT). The stakeholders are questioning the disregard of court orders by the Department of State Services (DSS) in presenting the detained persons in court. “This,” they said,” raises suspicion of a plot for secret trial by the federal government and lack of transparency in the court proceedings.” They called on the president to reverse the trend.

The Department of State Services (DSS), the security agency providing detention facilities for the arrested persons, who include Nnamdi Kanu and 12 aides of Sunday Igboho, has continually declined presenting the detainees in court for proceedings on their suits with the federal government.

The Department of State Services (DSS), on Thursday, undermined a court order to present the 12 detained aides of Sunday Igboho at the court sitting. Because of the non-compliance of the DSS with the court order, the court could not proceed with the case on Tuesday and had to adjourn the matter to August 2.

The presiding Judge of the Federal High Court, Abuja, Justice Obiora Egwuatu, had directed the DSS to produce the 12 aides of Sunday Igboho in their custody since July 2, 2021, in court on Thursday, July 29.

The 12 aides had sued the federal government protesting the breach of their fundamental human rights by the DSS.

The judge insisted that an order issued by a court of competent Jurisdiction must be respected and obeyed.

Counsel to the DSS, David Awo, told the court that the Service did not intentionally disrespect  or disobey the court. David Awo said that most of the aides are no longer in the custody of the DSS, noting that they have been taken away for verification of facts.

He stated that the DSS does not intend to detain the aides indefinitely, promising that the 12 aides would be released once investigations are completed.

Counsel to the 12 aides, Pelumi Olajenbasi, requested the court to sanction the DSS for “a deliberate act of disrespect.”

Olajenbasi also requested the court to order the DSS to release the aides on bail and allow him access to the 12 aides.

Justice Egwatu granted the second request of Olajenbasi; he issued an order mandating the DSS to allow the Counsel to see the detained aides between this Thursday and the next adjourned date (next Monday).

Earlier on Tuesday, at the trial of Nnamdi Kanu, leader of the Indigenous People of Biafra (IPOB), at the Federal High Court, Abuja, security operatives prevented journalists from having access to the courtroom to cover the proceeding. Videos of the security operatives’ restrictions showed the operatives vigorously searching the journalists adjacent to the entrance door.

Counsels to Nnamdi Kanu were also prohibited from accessing the courtroom, as relayed in the video clip.

The road to the Federal Capital High Court was barricaded by operatives of the Nigeria Security and Civil Defence Corps (NSCDC), the D SS, the police, and officials of the Nigeria Prisons Services, to provide the needed security of the court premises and environs.

The restriction of journalists and some counsels to Kanu generated initial suspicion of plot by the federal government for secret trial of Nnamdi Kanu, which precipitated apprehension that there may be no transparency in the trial processes.

The presiding judge of the Federal High Court, Justice Binta Nyako, had in an earlier judgement, stated that the trial of Kanu and three other Biafra agitators for treason and terrorism would not be in secrecy.

While there was tight security around the high court for the resumed trial of Kanu, the DSS which keeps the custody of Nnamdi Kanu did not bring the IPOB leader to court, citing logistics challenge.

Some of the media organisations barred included Daily Trust, PUNCH, Tribune, Daily Times, The Guardian, Vanguard, Daily Sun, The Cable, SaharaReporters, among others.

Some stakeholders have argued that the decision to gag a section of the media, and selecting some favourable organisations portrayed a plot to divert the course of justice in the trial of Nnamdi Kanu and Igboho’s aides. The stakeholders had called on President Buhari to ensure that the trial processes are transparent and would serve real justice.