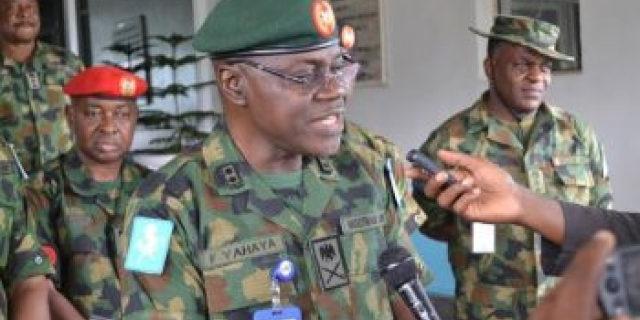 Chief of Army Staff, Lt.-Gen. Faruk Yahaya has inaugurated “Exercise Lion Heart” for the Land Forces Simulation Centre Nigeria (LFSCN) with a view to enhancing the operational efficiency of the troops.

Yahaya, who was represented by the Director of Courses, Department of Training (Army), Brig.-Gen. Ibikunle Ajose said that the simulation exercise was designed to afford the personnel the opportunity to understand different scenarios of threats.

He said that simulation gave almost the same effect with fewer resources when carrying out an exercise or training.

According to him, the exercise is based on various threat scenarios in terms of the insurgency and the various threats we are confronted with currently.

He explained that the exercise was based on two particular software such as Sword and SR24 which create various threat scenarios which the participants had to think through and proffer solutions to overcome.

The COAS said the establishment of the simulation centre was premised on the urgent need to extensively deploy simulation technologies for capacity building and force multiplication.

“It is therefore imperative for all participants to take this training seriously to derive maximum benefit from the exercise.

“This is in tandem with the provision of continuous leadership development, being one of the pillars of my command philosophy.

“On my part, I will strive to provide the centre with the requisite administrative and logistic support to make it a centre of international repute,” he said.

The Director-General, LFSCN, Maj.-Gen. Felix Omoigui said the exercise was aimed at enhancing the capacity of the technical and staff of the centre, army personnel, other sister services and security agencies for operational planning and decision making.

Omoigui said the training was in tandem with the COAS’ vision to have “a professional Nigerian Army ready to accomplish assigned missions within a joint environment in defence of Nigeria”.

He said that the LFSCN was established in 2019 and has since its inception embarked on the acquisition of simulation software and hardware for simulation exercises.

“The centre has so far conducted two major exercises, all aimed at sharpening the skills of personnel of the centre and the Nigerian Army in the newly acquired simulation software.

“Today’s joint exercise will enable the LFSCN and the Defence Simulation Centre, Jaji, to further build capacity on the use of software in building exercise scenarios and employment of assets in military operations other than war.

“It will also enable the two centres to share notes towards developing simulation training for our dear armed forces,” he said.