The nomination of President Buhari’s Personal Assistant on Social Media, Lauretta Onoche, as commissioner of the Independent National Electoral Commission (INEC) has continued to trigger outrage on social media.

Ms Onoche’s nomination is an addition to the growing list of controversial nominations by Mr Buhari.  NEWS DIRECT understands that this nomination is against Section 152 of the Electoral Act which provides that:

“No person holding an elective office to which this act relates or a registered member of a Political Party shall be eligible for or be appointed to carry out duties of a returning officer, an electoral officer, presiding officer or Poll Clerk.”

“The constitution mandates that a person nominated as an INEC National Commissioner should be non-partisan. Section 156(1)(a) of the 1999 Constitution of the Federal Republic of Nigeria clearly prohibits the appointment of any person who is a member of a political party as a member of INEC,” the coalition said.

“To further ensure the neutrality of the members of INEC, the Constitution clearly mandates in the Third Schedule, Part 1, Item F, paragraph 14 (1) that a National Commissioner shall be non-partisan and a person of unquestionable integrity.

“Mrs. Lauretta Onochie is not only a card-carrying member of the ruling All Progressives Congress (APC), and a Special Assistant to President Buhari on social media, but she is also notorious for her partisan, biased, and in some instances inflammatory comments on national issues targeted at perceived or imagined enemies of the Buhari government.

“Given her antecedents, it is highly unlikely that she will remain neutral and objective if successfully screened as one of INEC’s National Commissioners. We contend that her appointment will greatly undermine the neutrality and impartiality of the Independent National Electoral Commission and it will increase mistrust in the INEC and Nigeria’s electoral process.

“To this end, we the undersigned implore you to use your good office to completely reject the nomination of Mrs. Lauretta Onochie as a National Commissioner into Independent National Electoral Commission (INEC); urge President Buhari to withdraw her nomination in the public interest and in furtherance of his commitment to leave a legacy of a truly independent electoral institution that enjoys the trust and confidence of citizens and electoral stakeholders.”

In this report, NEWS DIRECT unravels the many lies of Ms Onochie. This newspaper recalls that in September 2018, she tweeted a picture of an asphalt road being constructed.  She captioned it “Nasarawa-Jos Road”, giving the impression that it was a road constructed by the government, but it is actually a stock photo uploaded to Getty Images in November 2015. 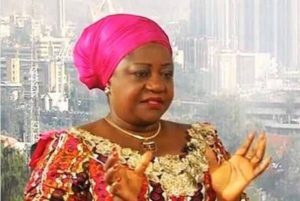 After backlash, she deleted the pictures. She apologised for the “big mistake” saying “it won’t happen again”. But it happened many times. In December 2018, she again shared pictures of foodpacks bundled with N500 notes and attributed it to Atiku Abubakar,  PDP presidential candidate in the 2019 election. A quick check of the picture showed that it first appeared in Lagos in February 2017 by a based charity organisation during an outreach.

The report reads that “in at least 12 cases, she had used inaccurate pictures. This was determined mainly by scouring the internet for instances where the pictures had been used before in an attempt to locate the original source. After the search, the findings were brought to Onochie’s attention through a phone interview, but she declined to comment on them, choosing rather to insult the reporter,” ICIR reported then.

“Four pictures appeared on Onochie’s timeline in September 2018 showing what was suggested as low-cost housing projects in the Federal Capital Territory, FCT, funded by the Federal Government. But one picture was first uploaded in April 2014 by the Lagos State Home Ownership Mortgage Scheme. The houses were built as part of the state government’s Rent-to-Own Programme that supports first-time buyer residents.

“Another picture is actually of a bungalow at the Sir Michael Otedola Housing Estate in  Odoragushin, Lagos. Former Lagos State governor Akinwunmi Ambode was photographed inspecting the estate in November 2016. A third picture dates back to at least 2016 and has been used in articles about housing projects inMalaysia, Guyana and Kenya. The ICIR traced the last picture to affordable housing that was planned for Revelstoke in British Columbia, Canada. None of the four pictures, therefore, show housing projects in the Federal Capital Territory, Abuja.”

This among many others were the lies of Ms Onochie in the past. Beyond the presidential aide’s nomination, Mr Buhari in the past also made controversial appointments.  He  appointed six people into position as board members for various parastatals and  agencies in 2017. The six deceased individuals were nominated. They include: Francis Okpozo, Donald Ugbaja, Garba Attahiru , Umar Dange Sokoto, Magdalene Kumu and Christopher Utov.

Some reports said the list also contained names of ex-convicts and appointments into a private firm’s board and a government agency whose board members are required to be elected by law.

He also appointed Imaan Sulaiman-Ibrahim as the new Director-General of the National Agency for the Prohibition of Trafficking in Persons (NAPTIP) despite not having the required qualification to hold the position.