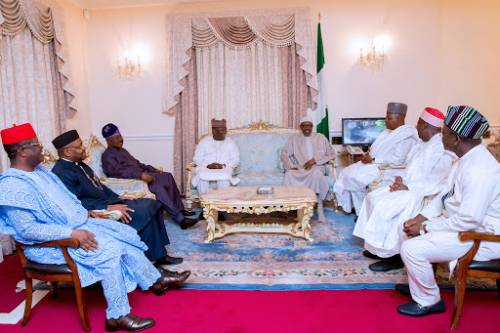 There have been countless occasions when Nigerian leaders threw caution to the wind and made heavy, insensitive statements about national issues which generated tension and only heated the polity the more.

SaharaReporters, in taking a look at seven of such occasions, reports that notorious among the leaders known for reckless comments are; President Muhammadu Buhari, former President Olusegun Obasanjo and Kaduna State Governor Nasir El-Rufai, among others.

In February 2007 as Nigerians were preparing for the third general elections since return to democracy in 1999, the then President Olusegun Obasanjo in Abeokuta, the Ogun State capital, said the April general elections would be a do-or-die affair for the Peoples Democratic Party (PDP).

By his reckless statement which already did not give room for opposition’s victory, Obasanjo confessed that his party would do everything to stop some politicians from leading the nation as from May 29.

He said, “It is left to you to ensure that we elect credible and committed leaders. I commend those of you in the PDP for your efforts so far. You must remain committed to the party. I will campaign. This election is a do-or-die affair for me and the PDP. This coming election is a matter of life and death for the PDP and Nigeria.”

The Governor of Kaduna State, Nasir El-Rufai, in August 2020 accused Southern Kaduna leaders of instigating killings in their own communities so as to get money into their bank accounts.

The governor blamed them for the ongoing crisis, saying, “I have no time for nonsense.”

Southern Kaduna has continued to experience killings of genocidal proportions in the hands of those mostly identified as Fulani herdsmen.

“I have no time for nonsense. I will not appease criminals. I will not appease idle people who have nothing to do but to raise a spectre of genocide. They do that to get money into their bank accounts and get donations from abroad instead of standing up. Anyone that is moderate; anyone that is promoting peaceful co-existence between various ethnic groups is considered a sell-out,” he had said.

They Will Return In Bodybags—El-Rufai

Also, El-Rufai, ahead of the 2019 elections said people from overseas who sought to intervene in the polls would go back in body bags.

El-Rufai made the comments during a discussion programme on the Nigerian Television Authority when the topic of the international community’s role in elections was raised.

Buhari was seeking a second term in office.

The discussion about the role of foreign countries in elections was raised on the programme in which reference was made to concerns expressed by the European Union, the United States and Britain over the suspension of the Chief Justice of Nigeria, Walter Onnoghen over allegedly breaching asset-declaration rules.

“We are waiting for the person who will come and intervene. They will go back in body bags because nobody will come to Nigeria and tell us how to run our country,” said El-Rufai.

“We have got that independence and we are trying to run our country as decently as possible,” he said.

Bauchi State Governor, Bala Mohammed, has been seen recently as a godfather to the killer Fulani herdsmen going by his open support for them to be armed and to defend themselves if need be, through killings.

On February 11, 2021, Mohammed said herdsmen need the AK-47 rifles to defend themselves from cattle rustlers and other challenges encountered on the road.

“It is not his fault, it is the fault of the government and the people,” he had said.

Even if schools close for eight months, I remain constituted authority – Late Ajimobi

Late former Oyo State Governor, Abiola Ajimobi, had a spell with aggrieved students of the Ladoke Akintola University of Technology, Ogbomoso, who staged a protest to his office over the closure of their school in January 2017.

But the governor felt they were unruly.

“You are complaining that your school has been shut for eight months. Am I the person who closed your school? If you want to go violent, we are here waiting for you. Whatever you want to do, do it. You are supposed to have little respect for constituted authority, no matter what,” the governor had yelled at the students.

I am Richer Than Osun State – Tinubu Boasts

A former Governor of Lagos State and national leader of the All Progressives Congress, APC, Bola Tinubu, stirred controversies in September 2018 when he said Osun State is not as wealthy as he his.

Tinubu, wanted for many mega fraud cases when he served as governor, boasted in front of the Ataoja of Osogbo, Jimoh Olanipekun, some states do not even have enough money from which a person of his calibre could ‘steal’.

Addressing the Osogbo monarch, he said, “People may be saying that Jagaban, Asiwaju has appointed someone to help him plunder Osun’s funds, and all, and I ask them: ‘How much exactly do you (Osun State) even have?’

“Kabiyesi I don’t want to say this in front of you but, Osun is not as rich as I am, that one would steal. I only want to help this state.”

The most recent and trending of the verbal insults which Nigerian leaders have hurled on the citizens was that of President Muhammadu Buhari on Twitter which ultimately forced the micro blogging platform, Twitter, to delete the tweet.

Buhari had in a tweet on Tuesday stated that his government will get “harder” on those hell-bent on destroying the country.

“Many of those misbehaving today are too young to be aware of the destruction and loss of lives that occurred during the Nigerian Civil War. Those of us in the fields for 30 months, who went through the war, will treat them in the language they understand.”

The President’s Twitter account was reported by Nigerians who understood the last part of the thread as threats against the Indigenous People of Biafra (IPOB) and its military wing, the Eastern Security Network (ESN).

Many reminded Buhari of the consequences of the Nigerian Civil War which lasted from 1967 to 1970, stating that such must not be repeated.