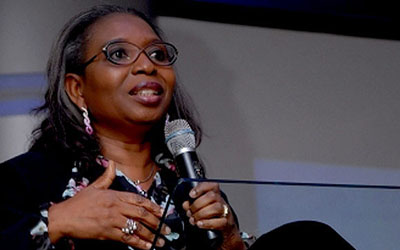 The chairman of the just dissolved board of First Bank of Nigeria (FBN), Mrs. Ibukun Awosika, insisted yesterday that her board took the right decision in removing Dr. Adesola Adeduntan as Managing Director/Chief Executive Officer of the bank on Wednesday.

“As a board, we acted in what we clearly believed to be in the best interest of the bank and we had great plans and aspirations for where the bank could go to in its future, building on all the work that has already been done in the last five plus years,” she said in her first reaction to the dissolution of her board by the Central Bank of Nigeria (CBN) on Thursday.

The apex bank also reinstated Adeduntan to his position, saying his removal by the former board had a dire consequence for the bank and “portends significant risks to the stability of the financial system.” The CBN said the board acted without due consultation with the regulatory authorities, especially given the systemic importance of First Bank Ltd.

“The CBN was not made aware of any report from the board indicting the Managing Director of any wrong-doing or misconduct; there appears to be no apparent justification for the precipitate removal,” it said. It immediately reconstituted the board and that of the FBN Holdco formerly headed by Mr. Oba Otudeko.

However,Awosika in a statement  entitled  “My FBN Group Journey,” on her Instagram page yesterday said she has “always acted in honour and integrity with the utmost interest of the institution, all our stakeholders and the nation.”

“Together with the rest of our team we built a company that became profitable in twenty four months and continues to be so. In early 2013, I was moved from FBN Life Insurance Ltd, to assume the chairmanship of FBN Capital working with a brilliant team led by Kayode Akinkugbe as the Managing Director.

“We worked hard to build the institution, bought Kakawa Discount House which I was again asked by the group to chair. We eventually merged the companies to create the FBN quest Merchant Bank Group, which I chaired until my appointment as Chairman of First Bank of Nigeria on January 1st 2016.

“For over five years, I have worked with a dedicated team of board and management, with the support of Central Bank of Nigeria to rebuild and restructure the institution for its future. This included cleaning up non-performing loans, establishing good operational governance systems and processes, building controls and an effective and robust risk management system.

“I am confident we have brought First Bank of Nigeria to a place where it is more than able to deliver utmost value to its stakeholders and the nation at large. As a board, we acted in what we clearly believed to be in the best interest of the bank and we had great plans and aspirations for where the bank could go to in its future, building on all the work that has already been done in the last five plus years.

“Without a shadow of doubt, I will unequivocally state that I have always acted in honour and integrity with the utmost interest of the institution, all our stakeholders and the nation.

A financial expert, Mr Okechukwu Unegbu, yesterday hailed the CBN for taking action to arrest what he called a potential drift in the operations of the First Bank. Unegbu, who is a former Managing Director of the Citizens International Bank, and a past president of Chartered Institute of Bankers of Nigeria (CIBN), told the News Agency of Nigeria (NAN) in Abuja that the  CBN action had restored confidence of both local and foreign investors in FBN, adding that it also rejuvenated stakeholders confidence in the banking industry.

“The action by the CBN is commendable, and it has proven to local and foreign investors, as well as other stakeholders, that the Nigerian banking sector is healthy,” he said. If CBN had not taken the step it took there probably would have been a run on the bank, with investors losing interest. The action by the CBN has rekindled confidence.” He said that the idea of the sacked board members of the bank approving “insider-loans” was criminal, adding that the former FBN board needed to be prosecuted.

He urged the CBN to be more proactive in future to nip such unprofessional excesses in the bud. “The idea of insider-loan in itself is a criminal offence. It is an abuse of confidence by the directors; the CBN has helped local and foreign investors to regain confidence in FBN. But the apex bank should go further by prosecuting them for such unethical banking behaviour. They should be made to explain their roles in the bank, and this should be done before the dust settles, so that they are not able to cover their tracks,” he said.

The financial expert urged Nigerian banks to always play by the rules and avoid cutting corners. “The banks are usually very careless; they usually do not consider the facilities they give. They approve facilities without due diligence. The CBN has now set precedence. And I am sure no bank will want to fall into its trap. Most of the banks will be very careful now; they will show more interest in their directors.”