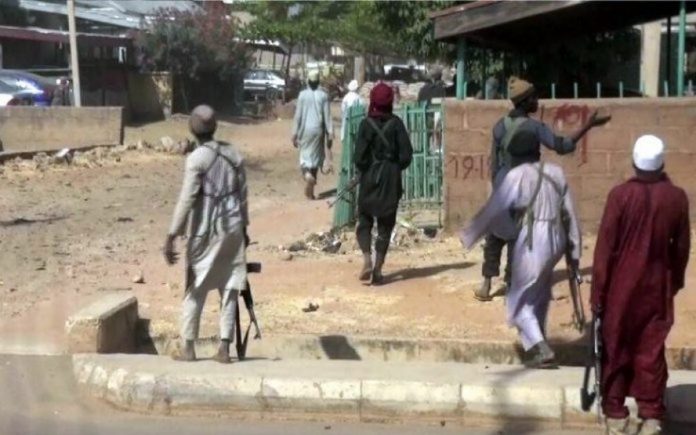 Last than a week after the attack on Geidam, Yobe state where ove 6,000 people were displaced from their homes, Boko Haram terrorists have again stormed Kanamma, headquarters of Yunusari LGA also in Yobe.

“As a matter of fact, Boko Haram insurgents attacked an outskirt of Kanamma Thursday night”, said Dungus Abdulkarim, spokesman of the Nigeria Police Force in the state.

“Unfortunately, we have lost contact with our people there due to the absence of a mobile network in the area, we will update you when we reach out to them,” he told Channels TV.

Reports said the military base was the target of the insurgents. The extent of casualties or damages is yet unknown.

Kanamma shares a border with the Niger Republic and is 34 kilometres away from Geidam.

It was the community where Boko Haram elements were first sighted in 2004 before they moved to Maiduguri, the Borno State capital, and started their deadly attacks in 2009.

Both Boko Haram and the splinter ISWAP are getting more menacing in recent weeks, attacking communities, power installations and military formations in both Borno and Yobe states.

On Sunday, they attacked a military super camp in Mainok, killing at least seven soldiers, according to an official military statement.

But unofficial sources put the Nigerian troop losses as over 30.

More embarrassing was that some of the new military equipment being supplied by the authorities to the base were hijacked by the insurgents.

The insurgents have published photographs of their weapons heist, as officials kept mum.