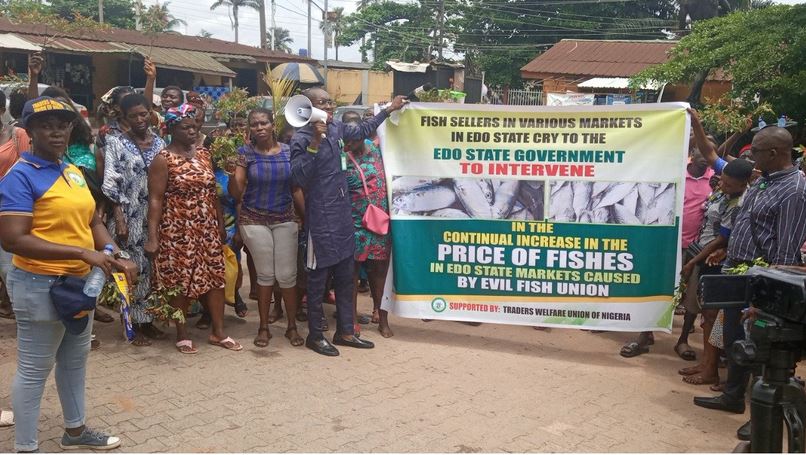 Due to the increment in the price of fish, sellers in various markets in Edo State took to the streets to protest and urge Governor Godwin Obaseki and stakeholders to intervene.

While marching  through major roads in Benin City, the state capital, the protesters alleged that the cold room owners ‘fish union’
caused the constant increment in the price of fish.

Mrs. Precious Igbinaduwa said a carton of fish which used to be sold at N7,000 suddenly skyrocketed to N37,000, due to the incessant increase in price,

”We have stopped selling fish at the moment, we will not return to the market until the government intervenes in the matter.

“At the moment, we the fish sellers have refused to sell fish in our markets in Benin city until the Edo State Government intervenes in this matter.

“We the fish sellers in Edo State markets humbly solicit the help of the Edo State Government and every other relevant stakeholder to step into this matter as the ordinary man and woman in Edo market can no longer buy fish in Edo as a result of the high prices of fishes caused by the evil fish union (sic) in our market.

“They will go to Port Harcourt and buy the fish and divide it amongst themselves and decide the amount they are going to sell. Even when we confronted them that the price is too high, and that we are running at a loss and that the common man can no longer afford fish, they said it was none of their business and that if we complain further we will come back to buy the same carton at N42,000.

“This is the reason why we came out. The money these people are making from us as profit is too much. At least N2000 to N3000 profit is enough from a single carton and not this N7000 to N8000 they are making. At times we will go to them, they will hoard the fish and say they will not sell,” she lamented.