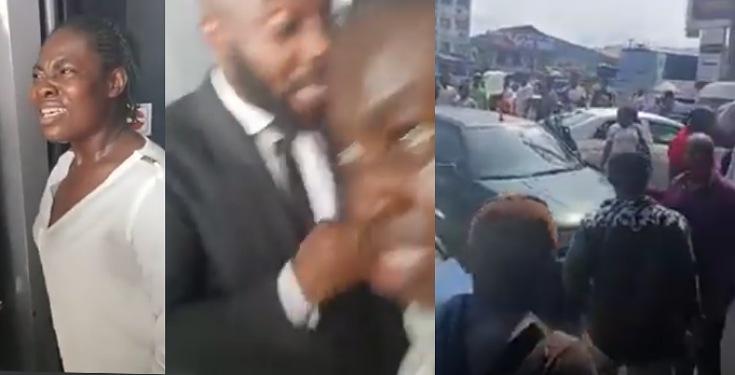 Anger As Bank Customer Slumps, Dies In Port Harcourt After He Was Allegedly Denied Access To His Money (Video)

There was chaos at a new generation bank in Port Harcourt after a customer, Mr Ogolo Owuso slumped and died while trying to withdraw cash.

It was gathered that the refusal of the bank workers to grant him access led to his early demise.

According to Punch, the incident took place on Monday in the Education area of the Port Harcourt City Local Government Area.

An eyewitness, who had earlier posted the picture of the deceased on his Facebook account, Uwaifo Oviame, noted that the victim died of frustration and due the unfriendly attitude of the bank’s customer service.

“The man just died now in front of the bank. He was refused access to his money since Friday even when he came with his next of kin. He was asked to go to the court to get an affidavit knowing the court is not in session,” he added.

Recall that the members of the Judiciary Staff Workers Association of Nigeria are on strike, halting all judiciary activities.

Meanwhile, a mild drama ensued there when a lady and two men, believed to be family members of the late man, besieged the bank, wanting to deposit the corpse of the man in the banking hall.

The young lady who was in tears, said, “Mr Ogolo Owuso is my brother. He came to the bank on Friday to withdraw money, but they said he should bring a next of kin over an issue I don’t know.

“When he came today (Monday), they said he should go and bring court affidavit and the man told then that he was sick and the courts are not in session, they refused. He died out of frustration,” the grieving lady stated.

When contacted, the state Police Public Relations Officer, Nnamdi Omoni, said he had yet to get the report.