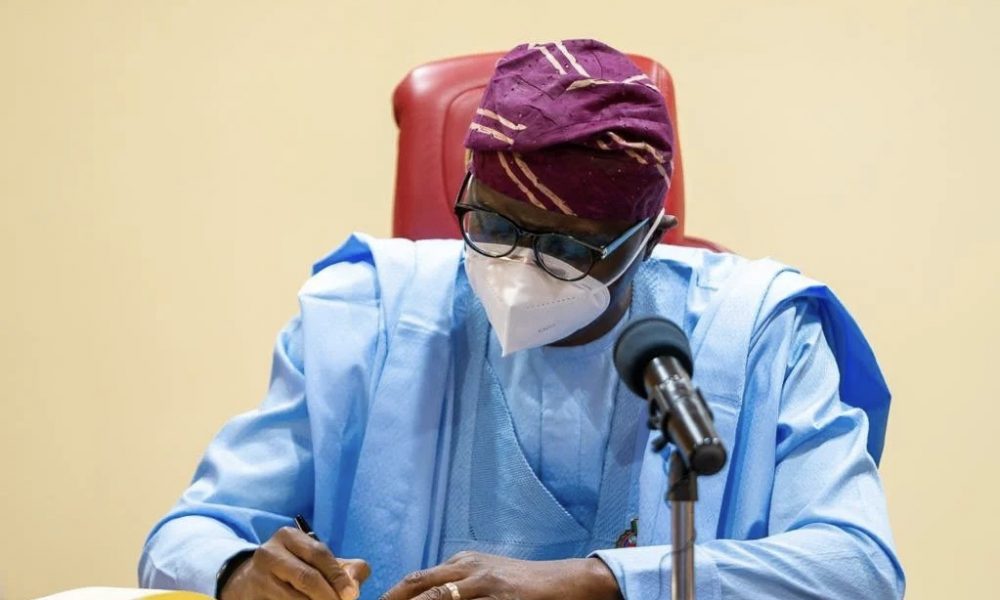 The Economic and Financial Crimes Commission, the Independent Corrupt Practices and Other Related Offences Commission, and other anti-graft agencies must hand over corruption cases to the state government under a new law signed by Lagos State Governor Babajide Sanwo-Olu.

A new anti-corruption agency will have exclusive powers to investigate financial crimes and corruption cases affecting the Lagos State Government’s finances, according to the legislation titled “Lagos State Public Complaints and Anti-Corruption Commission Law” signed by Sanwo-Olu last week, a copy of which was obtained by our correspondent on Saturday.

Section 13(3) of the law reads, “The commission shall upon the commencement of this law take over the investigation of all anti-corruption and financial crime cases involving the finances and assets of Lagos State Government being investigated by any other agency.”

Section 13(5) also states, “The commission shall have the power to the exclusion of any other agency or body to investigate and coordinate the investigation of corruption and financial crimes cases involving the finances and assets of the state government.”

The EFCC is currently investigating three former governors of Lagos: Bola Tinubu, Babatunde Fashola, and Akinwunmi Ambode. The anti-graft agency is also looking into Mudashiru Obasa, the Speaker of the Lagos State House of Assembly, who aided in the passage of the bill.

In November of last year, the EFCC wrote to the Code of Conduct Bureau, requesting that the asset declaration forms of Tinubu and Fashola be made available as part of a larger investigation. The specifics of Fashola’s investigation, on the other hand, have never been made public.

Tinubu allegedly enriched himself by using a tax consulting company, Alpha Beta, to redirect Lagos funds and commit tax evasion to the tune of N100 billion, according to the commission.

On the eve of the 2019 presidential election, the former governor was also registered to the EFCC for transporting cash-laden bullion vans to his house.

In October 2020, the EFCC interrogated Obasa, and his bank accounts were frozen by a judge. He is accused of mismanaging hundreds of millions of naira in public funds. While the Lagos speaker refuted the majority of the charges, he did admit that N80 million was accepted as estacode for the training of the wives of 20 legislators in Dubai.

The EFCC had also written to the Lagos Inland Revenue Service, according to PUNCH, requesting information that could help its investigation of its former Chairman, Babatunde Fowler. However, under the new legislation, the LIRS will be required to provide such information to the new Lagos State anti-graft agency, which has exclusive authority to investigate government finances.

However, the new legislation, which calls for the establishment of a Lagos State anti-corruption agency, requires all other agencies looking into the state’s finances to turn the case over to the state government.

According to the statute, the commission has the authority to investigate any individual or administrative action taken by any state or local government ministry, department, organization, or parastatal.

The new anti-graft body will look into any violation of state criminal law relating to corruption and financial crimes, as well as abuse of office, offenses involving the administration of justice, obtaining under false pretenses, cybercrime, fake news, email surveillance, and fraudulent dealings with property debtors.

The anti-graft agency is not subject to the command and control of any authority, according to the statute, which empowers the agency to prosecute someone who cannot justify his or her source of income.

The commission, on the other hand, is prohibited from looking into cases that are currently before the Lagos State House of Assembly, the Lagos State Executive Council, or any court of law.

The commission cannot investigate corruption cases involving members of the Nigeria Police Force and the Armed Forces, except for acts of corruption committed by them as private individuals.

Wilson Uwujaren, the EFCC’s spokesperson, said he would call back when asked if the commission would hand over its cases to the new Lagos State agency. However, as of press time, he has yet to do so.

Mr Gbenga Omotoso, the Lagos State Commissioner for Information, did not return a call or a text message sent on Saturday.

When contacted, the Attorney General of the Federation’s spokesman, Dr. Umar Gwandu, also requested more time to react. As of the time the paper went to bed, he had not responded to any inquiries.

Sanwo-Olu, however, was quoted as saying that the new anti-graft law was a testament to the state government’s effort to entrench transparency in governance and check malfeasance among officers entrusted with public resources, only moments after signing it.

On the same day, the governor signed the Lagos State Lotteries and Gaming Authority Bill 2021, arguing that the state anti-corruption agency will be autonomous and supplement efforts by similar federal agencies.

The two bills signed by the governor were among those supported by the executive and passed by the House of Assembly to improve good governance, according to Moyosore Onigbanjo, the state Attorney General and Commissioner for Justice.

Since the administration began, he said, 26 executive bills have been introduced.

Chief Mike Ozekhome (SAN), a human rights lawyer, told our correspondent that “the Lagos State law is legitimate,” and that “the constitution grants states the right to make certain laws.”

According to the senior advocate, since corruption and crime are not on the exclusive legislative list, the Lagos House of Assembly has greater authority to enact such legislation for the good of the state than the National Assembly, which established the EFCC and the ICPC.

Ozekhome claimed that since the House of Assembly is in charge of enacting laws governing Lagos State’s taxes, charges, and finances, the Assembly has superior authority over the diversion of such funds.

“As a result, anybody who commits a crime relating to certain charges, fees, or taxes is liable to the House of Assembly, and this amounts to what is known as an economic crime,” he explained. As a result, it is the House of Assembly, not the Federal Government, that has the authority to deal with economic crime under its own jurisdiction, just like a principal overseeing his students through the National Assembly.

“Therefore, the law made by the Lagos Assembly about financial crimes is a legitimate law in accordance with Section 4 of the constitution and the Second Schedule Part 1 and 2 of the exclusive and concurrent legislative list. At the federal level, there is no regulation that is in violation of the EFCC.

“If the EFCC wants to impose its Act, it should go to other states other than Lagos, which now has its own law,” he said. In the same way as the Federal High Court is governed by rules.”

Auwa Musa (Rafsanjani), the Executive Director of Transparency International Nigeria and the Civil Society Legislative Advocacy Centre, told our correspondent that the new law could aid in the fight against corruption, but it could lead to a conflict between the EFCC and the state government.

Last year, the new Chairman of the EFCC, Abdulrasheed Bawa, opened inquiries into Tinubu, according to Rafsanjani. He wondered if the case could be taken up by the new Lagos department.

As a result, he has requested that the state government amend parts of the law that could cause conflict.

“The investigation into former governor Bola Tinubu, which was led in Lagos by the current EFCC boss when he was in charge of the zonal office, raises concerns about duplicity of role and the likelihood of inter-agency competition if the proposed commission had been formed sooner.

“This isn’t even taking into account the perceived conflict of interest that would follow any state-led investigation and prosecution of its so-called ‘kingmakers.’ In order to avoid throwing out the baby with the bathwater, the Lagos government should amend the law, especially around its apparently controversial or problematic clauses, to avoid any such foreseeable issues,” he said.

Debo Adeniran, Director of the Centre for Anti-Corruption and Open Leadership, praised the establishment of the anti-corruption agency in Lagos, noting that the EFCC and other federal agencies already had their hands full.

The EFCC and other federal agencies, according to Adeniran, could assist the state’s new anti-corruption agency in investigating crimes to help it expand its power.

Inibehe Effiong, an anti-corruption crusader, told reporters that the Lagos law would not hold up to legal scrutiny.

Effiong claimed that the new anti-corruption agency was granted too many powers, citing Section 4(5) of the constitution, which states that any law passed by a House of Assembly that is inconsistent with a law passed by the National Assembly is invalid to the degree of the inconsistency.

“The assumption is that agencies like the EFCC and ICPC are formed in furtherance of the Federal Government of Nigeria’s exclusive legislative powers,” the activist continued. In anti-corruption matters, no state in Nigeria can contend with the federal government, let alone supplant the legislative powers vested in federal anti-corruption agencies.

“It is brazen unconstitutionality on the part of the Lagos State House of Assembly to attempt to bar the EFCC and the ICPC from investigating and prosecuting cases of corruption and economic and financial offences involving Lagos State properties or finances.”