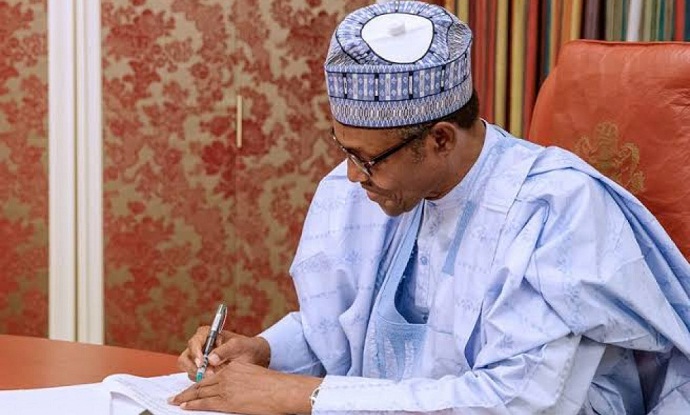 President Muhammadu Buhari has directed his Chief of Staff, Professor Ibrahim Gambari, and Minister of Labour and Employment, Dr. Chris Ngige, to ensure issues surrounding the ongoing industrial action by the Judiciary Staff Union of Nigeria (JUSUN) are resolved soon.

Ngige disclosed this to State House Correspondents after meeting with the President at the Aso Rock Presidential Villa in Abuja.

The Minister also said he sought the president’s intervention in the various ongoing industrial actions by labour unions, adding that he had presented their various demands to him.

“I have to brief (the President) on the labour industrial milieu in the country. You know that we are like in a season of strike.

“We have the strike baton by the resident doctors actively supported by the Nigerian Medical Association (NMA) and we held certain meetings at which we reached some agreements in conciliation.

“And I had to brief him ahead of the efforts we are making in those areas, like we agreed that the hazard allowance should be reviewed. And as a matter of fact, before they embarked on the strike, my ministry and the Presidential Committee on Salaries had initiated what we can call a pre-emptive arrangement to make for further discussion by all the stakeholders;

Federal Ministry of Health, Salary, Income and Wages Commission, the health unions, the NMA that is leading National Association of Resident Doctors (NARD), Association of Dental and Medical consultants, Association of General Duty Doctors, and others, while JOHESU will lead Nurses and Midwife Association, pharmacists, lab technologists, and other people working in the health sector under the big umbrella of Medical and Health Workers Union.

“So, that meeting has kick-started. And we know from our initial meetings and the data we have, we have an idea of what amount of money that will be consumed or utilised to effect this change, which is going to be a permanent change, unlike what we had last year when we did a special COVID-19 allowance, which all of you know the government budgeted N20 billion for.

“And when we started the payment, it gulped a whopping N32 billion. So, we are working now to make the health workers feel that they are appreciated, and that the efforts are appreciated by government.

“So, I have briefed him on that. We have some fallouts from the ASUU discussion on the agreements reached then, a Memorandum of Action so that we can meet up the timeline on certain things promised. For example, the Revitalization Fund, which ASUU has called my attention to that they has not been done for the university system.

“So, we discussed it and necessary arrangements have to be made now for us to pay that amount to the NEEDS Committee accounts with the Central Bank”, he said.

The minister said that he had also discussed the issue of financial autonomy for the judiciary and the legislature with the President.

“We reviewed what had been done. The Chief of Staff did what we call in labour parlance tripartite plus arrangement by engaging them, both parties conceded; Nigeria Governors’ Forum (NGF), the heads of courts, State judges, the unions and the Presidential Implementation Committee for Executive Order 10 led by the Attorney General, but standing in for him by the Solicitor General of the Federation and Permanent Secretary.

“So, we reviewed where they are. We had a twist two days ago because the arrangement they had with the Chief of Staff had to be altered when the governors got back to their forum.

“As the conciliator, when they presented the two papers, one from the Solicitor General and another one from the Director General (DG) of the NGF, I had to tell them that we have to reconcile those papers, because the areas that they differ are very fundamental areas in terms of the execution of Sections 83 and 162.

“We need the governors to touch this among themselves and come back, because in consultation, I receive documents, issues from the unions, and the NBA, and even the representative of the heads of courts on one side, and then from these government people of NGF, and the Solicitor General of the Federation representing Attorney General.

“So, if the government papers are not on the same page, then the discussion will be very difficult and fruitless. So, that is where we are.

“Nobody is happy that the courts are closed. There are grievous implications for the country if suspects cannot be taken to court for them to be remanded or put on bail.

“So, it is a very congruous situation for us. So, this is the main issue I briefed the President on and some assignments. Others are sundry issues that pertain to my ministry and parastatals which I am already handling. I just have to report back to him where we are. So, this is the situation and the purpose of my visit or appointment”, he said.