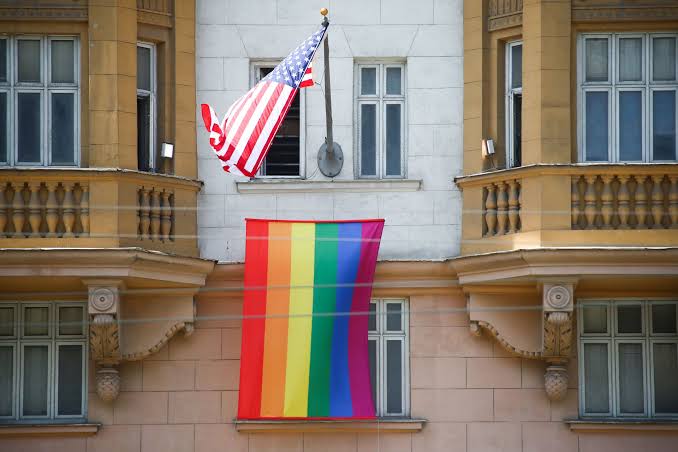 The US government under Joe Biden has communicated to its embassies all over the world to fly the Gay Pride flag on the same flagpole as the U.S. flag in support for LGBTQ rights.

Secretary of State Antony Blinken issued a blanket authorization for U.S. diplomatic outposts around the world to fly the Pride flag, a move that is in stark contrast to Trump’s administration in the State Department which was run by former Secretary of State Mike Pompeo.

In diplomatic cables sent to diplomatic posts around the world, Blinken gave authority for diplomats to fly the Pride flag before May 17, which marks the international day against homophobia, transphobia, and biphobia, as well as June, which in the United States and many other countries is Pride month.

The cable contained a clause though, saying the authorization is not a must and chiefs of mission who run each embassy or consulate can choose whether to fly the Pride flag or showcase other symbols connoting support for LGBTQ rights based on what is “appropriate in light of local conditions.”

During the Trump era, the State Department blocked embassies’ requests to fly the flag on the same flagpole as the U.S. banner. Diplomats were told they could display Pride symbols elsewhere in embassies.

In 2019, then-Vice President Mike Pence defended Trump’s move, telling NBC News in an interview that “when it comes to the American flagpole and American embassies and capitals around the world, one American flag flies.”

All U.S. diplomatic missions require prior written approval from senior State Department leadership in Washington to fly any flag from the same halyard as the U.S. flag, with the exception of a foreign service flag or a prisoner of war/missing in action flag. In accordance with U.S. law, such flags are to be flown under the U.S. flag.

During his Senate confirmation hearing in January, Blinken vowed to stand up for LGBTQ rights, including allowing embassies to fly the Pride flag and swiftly appointing a special envoy once confirmed as President Joe Biden’s secretary of state.