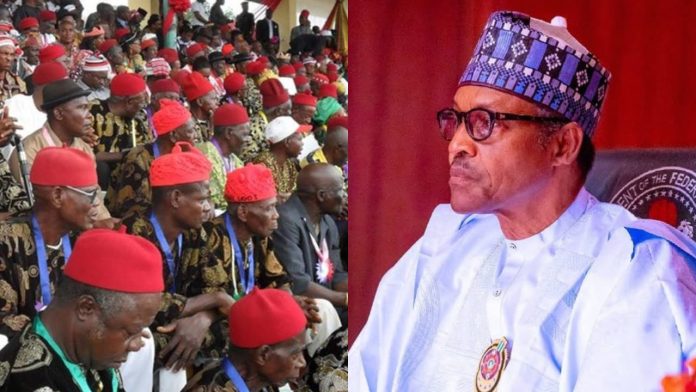 The socio-cultural pan-Igbo organization, Ohanaeze Ndigbo, has berated President Muhammadu Buhari for being soft on bandits and Boko Haram terrorists in the north, but being hard on agitators in the southeast with military operations. The group, therefore, demanded the president to be fair to Biafra agitators in the southeast same manner his administration had not been hard on bandits and Boko Haram terrorists in the north. The Ohanaeze in a statement by the Secretary-General, Mazi Okechukwu Isiguzoro, told the All Progressives Congress (APC)-controlled Federal Government to review the strategy adopted against secessionist agitators in in Nigeria. The Ohanaeze leadership promised to assist the president to dialogue with IPOB leader, Nnamdi Kanu, towards arrangements for negotiations with the federal government.

The group chided the Nigerian government for selective approaches in addressing agitations in the country, treating bandits and Boko Haram terrorists with hand gloves and going hard with military operations against Biafra agitators in the southeast.

The leadership of Ohanaeze in the statement by the Secretary-General, Mazi Okechukwu Isiguzoro, declared: “We hopefully expect them to grab this rare opportunity and talk with them.

“The best approach is to change tactics and strategies in dealing with secessionist threats rather than resorting to ‘an eye for an eye’.

“The Federal Government should know that what’s good for the goose is also good for the gander; it’s not fair to use carrot and stick policy for bandits and Boko Haram members in the North and use brutal forces against secessionist groups in the South.

“Negotiations are the best approach for rebuilding trust and confidence amongst secessionist groups, incarceration and military actions are outdated weapons used to win the battle against secessionist threats.”

The Nigerian presidency had stated that agitators would not succeed in intimidating President Buhari to divide Nigeria.

The Nigerian government also protested that the asylum granted Biafra agitators by the United Kingdom (UK) is disrespect to Nigeria.

The Ohanaeze made valid point in berating the Buhari administration for not using same security template in intervening over secessionist or violent uprising across the country from the northwest, northeast, north central, then, the southeast and southwest.