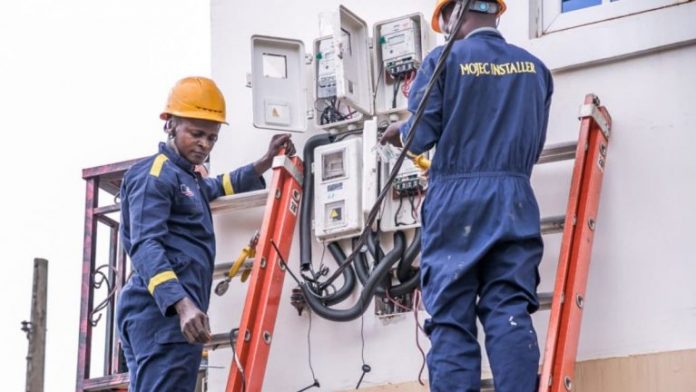 When Tunde Saheed, a 28-year old banker, got his electricity bill for February, he was shocked and angry at the same time.

The bill read N46,210.03k for a two-bedroom apartment he recently moved into in Surulere area of Lagos State as part of preparation for his marriage later in the year.

For a young bachelor who lives alone and works every day apart from weekends, Saheed could not understand the rationale for the high bill, except that his house is one of the few houses in the area without a prepaid meter.

He said he tried contacting Eko Electricity Distribution Company on its official Twitter account after attempts to speak with the company’s marketer failed to yield the desired result.

“I have no option than to pay part of the amount pending when my landlord gets us meters but it is very unfortunate because this is exploitation by the DisCo,” he complained bitterly.

Many electricity consumers in Nigeria are facing the same situation with 62.63 per cent of them still on estimated billing as at September 2020, according to the Nigerian Electricity Regulatory Commission (NERC).

NERC, which regulates the power sector, believes that the metering gap for end-use customers remains a key challenge in the industry.

Worried by the development, which had led to low bill collections by the DisCos, the Federal Government on Oct. 30, 2020, flagged off the National Mass Metering Programme (NMMP).

The programme is aimed at meeting the target of closing the metering gap in the Nigerian Electricity Supply Industry by  December.

It would assist in reducing collection losses, while at the same time increasing financial flows to achieve 100 per cent market remittance obligation of the DisCos.

Part of the objectives also include the elimination of arbitrary estimated billing, improving network monitoring capability and provision of data for market administration and investment decision-making.

But more than four months after it commenced, the government’s plan to distribute free one million prepaid meters to Nigerians under the phase zero seems to have come unstuck.

Ikeja Electric, which targets metering 106,701 of its customers within the period blames the slow pace of the programme on apathy and attitude of some of the unmetered customers.

Mr Felix Ofulue, Head, Corporate Communications, IE, said only about 24,000 customers had been metered so far under the scheme.

He said: “The challenge we are having is that people are not going online to register. Only 57 per cent have done their Know Your Customer (KYC) and some are even saying they don’t want meters.

“There is also the issue of separation of accounts by customers which involves installation of their electrical connection to the required standard before they can be issued meters.

“Some of them have refused to do that and we cannot issue one meter for instance for five flats because it can easily get damaged.

“All those who are yet to register are enjoined to visit map.Ikejaelectric.com to complete their registration as soon as possible.”

Similarly, Eko Electricity Distribution Company (EKEDC), announced that its target was to meter 100,000 customers under the phase zero.

Mr Godwin Idemudia, General Manager, Corporate Communications, EKEDC, said the NMMP had already commenced with a pre-installation survey, followed by installation of meters for the customers.

“Customers who are yet to register are advised to visit EKEDC official website and fill the application form via www.ekedp.com/ordermeter  to benefit from the programme,” he said.

However, electricity consumer groups have faulted the claims by the DisCos that customers were responsible for the slow pace of the NMMP.

Mr Adeola Samuel-Ilori, National Coordinator, All Electricity Consumers Protection Forum, said even customers who made payment for meters under the Meter Assets Providers (MAP) scheme were yet to be metered.

“They can’t put the blame on customers because many customers want to get their meters but the DisCos cannot even after making payments for them under MAP.

“The truth is that the DisCos are enjoying this estimated billing and exploitation of Nigerians otherwise this issue of metering should have been resolved a long time ago,” he said.

Samuel-Ilori noted that limiting the registration to online had also affected some customers, adding that the DisCos should explore other options to make customers embrace the programme.

“When you do this kind of programmes you need Non Governmental Organisations to help you look into it. They need us to do their follow up to ensure that the process is going on as scheduled,” Fadairo said.

He said the regulation clearly stated that any customer who rejected a meter should be disconnected, adding that the DisCos had no excuse for not installing customers with meters.

Mr Sina Odugbemi, Converner, Where’s the Light Movement, said the failure of the NMMP was due to lack of sincerity.

“All these things are just to keep consumers busy because it does not take anything to have the meters and give them out. All those procedures are just to buy time.

“The DisCos need to do an audit of how many meters they have given out since they started the programme and show sincerity that they want it to succeed,” Odugbemi said.

Reacting to the complaints, Mr Kola Balogun,  Chairman, Momas Electrical Meters Manufacturing Companies Limited (MEMMCOL), one of the indigenous companies involved in the NMMP, maintained that meters were available.

Balogun said: “There are meters practically in most places. What we are battling with is manpower. We are recruiting more hands in order to address the challenges.

“There are challenges in terms of logistics because some places are too far from other locations so we need more people to be able to meet up the deficits.

“That is why we are recruiting and training so that more people will join the installation team to speed up the process of installation.”

He also commended the federal government for the initiative, stressing that the programme should be sustained due to its immense benefits to the country.

“Apart from helping us solve this problem of metering gap once and for all, it has created an opportunity for us to empower our youths with meter installation skills which will help in reducing unemployment in the country,” Balogun said.

Experts are of the view that NERC needs to ensure the success of the NMMP by working with the DisCos and other stakeholders to overcome these challenges hindering its smooth implementation.