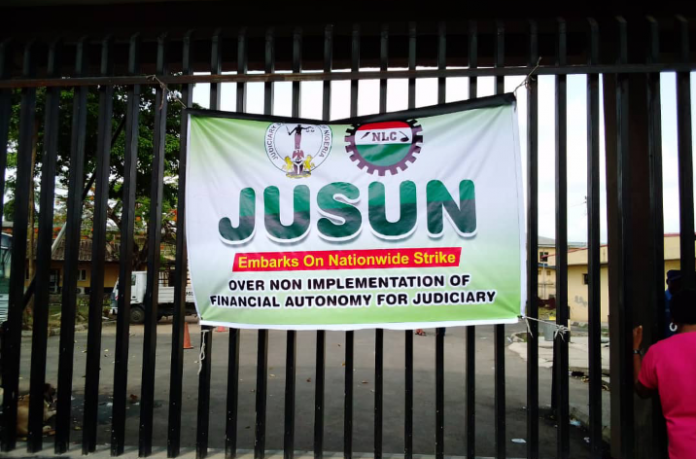 The Judiciary Staff Union of Nigeria (JUSUN) says it remains firm in its quest for the implementation of financial autonomy for the judiciary, until its demands are met.

The National Secretary of JUSUN, Mr Isaiah Adetola, told the News Agency of Nigeria (NAN) that the union was tired of broken promises.

He said that in 2015 the union had embarked on a prolonged strike action following which there was a memorandum of understanding from the state governors, which understanding was never kept.

Adetola said the union will hold a meeting  with the Minister of Labour, adding that if such resolution on implementation of its demand for financial autonomy is presented and endorsed by all, then the strike can be called off.

”Where such endorsement is not implemented to the letter, the union would again, resume its strike action

“You see, we are tired of promises and promises that will be broken after a little while; if you remember we went on strike in 2015 for the same actualisation of financial autonomy and even went to the extent of taking an MOU from the governors and at the end, they relented.

“Today we are going to the ministry of labour; the meeting was rescheduled for Thursday last week but while we were about leaving our office we got a text message that the meeting has been postponed indefinitely

“Yesterday, we were at the front of the court of appeal in Abuja where we demonstrated and later asked our people to go home because the Minister of Labour has equally invited us for another round of meeting today at 3 p.m. , with these governors; whether they will cancel it we don’t know.

“JUSUN is not the writer of the constitution of Nigeria; it is the grundnorm for all of us and the very law that created the executive, the judiciary and the legislature.

“It takes two to tangle, so if we see them today at the ministry of labour and they come out with that resolution and we all endorse it, the whole world will hear about it, then we call the strike off, and wait for implementation

“Where they do not implement within a reasonable time, then we are coming out again,” he said

Adetola also faulted online reports suggesting that the JUSUN strike had been suspended following an address by its National President, comrade Marwa, and described it as a ploy.

According to him, the JUSUN President is not fine enough to address the press as he is currently receiving medical attention.

“What you hear from me is authoritative; we have not called off the strike, anything to the contrary is a ploy, a deception and a waste of time,” he said

The News Agency of Nigeria (NAN) reports that JUSUN had on April 6, began a nationwide strike action, calling for a full implementation of judicial financial autonomy as provided for by the 1999 constitution.

Following an emergency meeting by the union’s National Working Committee on April 15, a circular was issued on April 16 in which it was announced that a peaceful protest will be held in Abuja, to further drive home JUSUN’s demand.

The union had also directed all its branches in the 36 States of the Federation to replicate the “march” in their various jurisdictions.

Meanwhile, the President of the Nigeria Bar Association (NBA) Mr Olumdie Akpata in a statement issued on April 16, also directed all NBA branch chairmen, to mobilise their members, for a visit to their respective state governors seeking compliance with constitutional provisions on judicial autonomy.

NAN reports that following the various protest, on Monday,  the Nigerian Governors’ Forum (NGF) consequently, said it will ensure an implementation of financial autonomy for state legislative and judiciary institutions by May 2021

Chairman of the NGF, Dr Kayode Fayemi had given the assurances after a meeting with the Chief of Staff to the President, Prof. Ibrahim Gambari at the Statehouse.