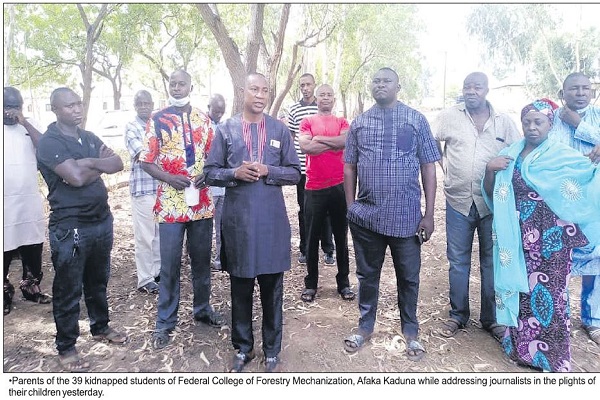 The abductors of the 39 students of Federal College of Forestry Mechanisation, Afaka, Kaduna State have resorted to threats to kill the victims and marry the girls among them, following the refusal of the state government to pay ransom.

The bandits are demanding N500 million to release the students who were abducted on March 12.

Parents of the abducted students told reporters on Friday in Kaduna that they have been contacted individually by the bandits, demanding the ransom and proposing to marry the females among the abductees.

Ten of the students have already been released.

Secretary of the parents’ association, Mr. Friday Sani, pleaded on Friday with Nigerians to come to their aid by raising funds for them to rescue their children.

He said Kaduna State has not only refused to pay the ransom, it has also threatened to prosecute any of them who pays ransom to the bandits.

But Sani said yesterday that they (parents) are not afraid of arrest or prosecution by government.

He asked Nigerians, non-governmental organisations, charity organisations and donors to “come to our aid in donating to rescue our children.

“We don’t know what is happening to them (abductees). The bandits have threatened to kill our children if we play (sic) with them.

“The other time they (bandits) said they will marry the females and kill the men and that a time will come when even if we bring the money, the money will not be useful.

“The government has said any parent who negotiates with the bandits will be prosecuted but most of the parents are already arrested emotionally. Our children today are faced with AK 47 guns on them.

“The fate of our children is what we don’t know. They have spent 36 days without clothing, food, clean drinking water or bathing.

“The condition we are in today is very pathetic, and we are calling on the entire world to come to our aid.

“We held a protest and the Kaduna State Government called us, thinking they were going to give us hope that they would rescue our children, but they told us that anybody caught negotiating with bandits will be prosecuted.

“That also led to our second coming out to address the world through the media that it will be better for us to be arrested, even though we have already been arrested emotionally since our children’s abduction.

“We are already under the arrest of government. Some of us could not eat or sleep while some of us have developed sickness. So there is no arrest higher than this.”

He vowed that they would continue to protest “no matter the number of security forces.

“The highest is death, and we are ready to sacrifice that for our children who have a promising future.

“If we can negotiate for the release of our children and succeed and then being arrested afterwards, we will be happiest people.

“It is better for us to be in government’s detention rather than allow our children to die.

“The fate of our children is what we don’t know and that is the problem we have. The government has kept silent since the release of 10 of the children.

“The government can turn Kaduna into Dubai, but if there are no people to benefit from it, then it is a waste of resources. People are not secured. The stories of daily incidents of killings, kidnappings and other forms of crime are disheartening.

“We are pleading with the government to ensure our children do not lose their lives during the course of any action they want to use in securing the release of our children.”

The bandits had broken into the college in the night of 11th March, 2021 and whisked away 39 students, majority of whom are females.

About 12 hours after the raid, the bandits released videos showing them beating the victims and demanding a N500 million ransom from the government.

Reacting to the allegation of abandonment leveled by the parents of the abducted students yesterday, the Kaduna State Government said the abduction of the students was being politicised.

It added that Governor Nasir Ahmed El-Rufai would not succumb to emotional blackmail but continue to work hard until banditry is contained.

In a statement issued by the state’s Commissioner for Internal Security and Home Affairs, Mr. Samuel Aruwan, the government said: “The Governor will continue to work hard until banditry is contained without succumbing to emotional blackmail and gradual politicisation of the unfortunate situation.”

The commissioner added: “Contrary to the mischief in some sections of the media, the bond between the Governor of Kaduna State, Malam Nasir El-Rufai, and the parents of the abducted students of Federal College of Forestry Mechanization and other citizens in captivity is deep empathy amidst spirited efforts to secure them.

“For instance, some sections of the media have been reporting the parents’ responses to purported threat by the governor to prosecute them, which is simply false and deeply mischievous.

The statement of the government warning impostors who have been presenting themselves as government-appointed emissaries to negotiate with bandits across the state has nothing to do with the parents or relatives of the abducted students or any other person in captivity.

“It was rather directed primarily to some identified individuals exploiting the security situation in the state and neighbouring states.

“Finally, the state government will not join issues with the parents whose pain we understand and with whom we share the common goal of the return of all the abducted students.

“The state government continues to work towards crushing banditry, kidnapping and other acts of criminality menacing our people and communities.

“We believe that most people of goodwill share this desire and we urge everyone to be wary of those who see in the misery of others only an opportunity for needless controversy.”