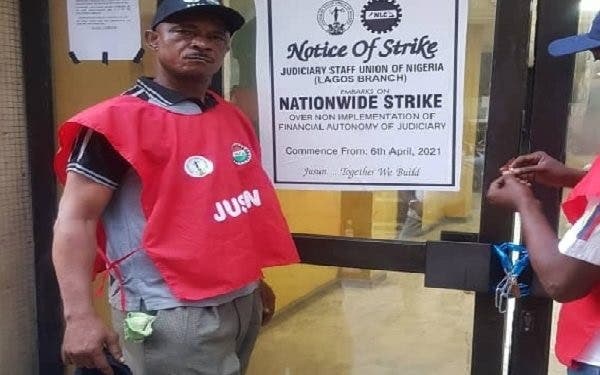 JUSUN vows to sustain strike until 36 states comply with financial…

The Judiciary Staff Union of Nigeria (JUSUN) on Wednesday vowed to continue the ongoing nationwide strike until all the demand on financial autonomy for Judiciary is implemented by all the 36 State Governments.

This is just as members of the House of Representatives Committee on Judiciary, chaired by Hon Onofiok Luke who converged at the interactive session with JUSUN officials held at the National Assembly complex, Abuja, frowned at the flagrant breach of the provisions of the 1999 Constitution (as amended) by State actors.

In his address, Hon Luke who expressed solidarity with the striking workers assured that the Parliament will not renege in its responsibility towards the realization of the Judiciary’s financial autonomy which will invariably impact the workers’ welfare and judicial officers.

He however urged the striking workers to shift the battle to the sub-national level, specifically to those states that have not complied with the established processes of financial autonomy.

“The correctional centres are congested right now. It is a source of worry because of the strike because Courts are not operating. Our police stations and police cells are overcrowded and it should not be in this time of the pandemic.”

In his presentation, JUSUN Deputy National President, Emmanuel Abioye who affirmed that Federal Government has complied on the financial autonomy for the Judiciary, however, argued that all 36 States are still in default, hence underscored the need to uphold the rule of law.

“We started agitating for financial autonomy of the judiciary for a very long time. 1999 was a time that the Constitution of this Federal Government was enacted and since that time till now the provision of the Constitution that guarantees financial autonomy which by implication is the independence of the judiciary has not been implemented and we wonder why it is so.

“Initially, why we were puzzled that that was not implemented, we went to Court before 2014 and we were in Court for some time and graciously we got judgment in 2014 and we have defeated the Attorney General, Accountant General and the Governors of all the States of the Federation.

“So we got the judgment and since that time till now the judgment has not been executed. Recall that we went on strike that is avoidable also in 2015 for a similar reason. Where there is no rule of law.

“We don’t know why it is difficult to implement the financial autonomy of the judiciary as guaranteed by section 121 sub-section 3 of the Nigerian constitution 1999 as amended, Section 81 sub 3 of the same constitution and section 162 sub 9 of the Constitution.

“Without even looking at the situation that okay, the judiciary has been known and tagged as the hope of the common man. If the judiciary is not free and it does not have hope, it cannot give hope to anybody. I am happy you said this house is the house of the common man. It gladdens my heart. So our agitation is not only for us alone but for the thing to be done properly as it is supposed to be.

“The judgment if the Court indicates that we are not clear about what the provision is all about. The judgment is very clear. We cannot be suffering and smiling. We are sorry. We don’t want to sound arrogant and rude and we are trying to control our emotions at this time. Many of our members have lost their lives in the course of all these agitations that is not necessary if everything has gone normal; if the constituted authority had done the right thing. The agitation is based mainly on the implementation of financial autonomy which is long overdue.

“We had earlier notice to the appropriate authority to do something but it looks as if we are not being taken seriously. It is avoidable. We are not happy going on strike, but you can use your position to appeal to the right place that they should comply with the provision of the Constitution.”

In his contribution, JUSUN National Assistant Secretary, Comrade Saidu Adamu members of the delegation called for the amendment of the 1999 Constitution with a view to empower National Assembly to remove any erring State Governors who breach any provisions of the country’s ground norm, adding that why should someone voted into.

He maintained that strike remains the only language understood by the State Governors, adding that the subnational governments were carried along before the proclamation on the Executive Order but only opposed to the deduction from source by the Accountant General of the Federation.

“It is very painful to say that a country of over 206 million people, do not have a viable judiciary, so what is the basis of all we are doing?

In his Intervention, Hon. Shaba Ibrahim (APC-Kogi) stressed that the Governors who are the centre of the crisis enjoy immunity that encourages impunity are insulated from the fallout of the nationwide strike.

“My solidarity is not unconnected with the fact that we have had many provisions of the constitution that is being obeyed today in the breach which is unacceptable to any law-abiding citizen of this country.”

He however urged the Union to direct the protest to “those who are in breach because the culture of impunity in this country stems from the fact that when the punishment comes, everybody serves it so you ask why you should comply.”

He observed that the “federal courts can join in the action by pressuring the respective states that are in breach so that collectively we can get them to do the right thing.

“Unfortunately, when things like this happen, it is the ordinary man that suffers. None of those who have refused to implement these provisions is caught by the effect of your action. It is the awaiting trials inmates, those who want to have their rights determined one way or the other that are suffering it.

“None of the governors are suffering it. They have immunity that has led to impunity in some cases. Mine would be an appeal so we don’t lump everybody together. The moment you have a society where you don’t have a standard measure of reward and punishment it is too bad.”

In his ruling, Chairman, House Committee on Judiciary, Hon Onofiok Luke noted that the 9th Assembly knows where the problem is and will not shy away from addressing the issues headlong.

He, therefore, appealed to the Nigeria Governors’ Forum (NGF) on the need to put the country first by complying with the provisions of the Constitution on financial autonomy for both Legislative and Judicial arms of Government.

Hon. Luke who maintained that “nobody is above the law,” expressed grave concern over the support exhibited for financial autonomy for Legislature by some serving Senators vehemently opposed the initiative while serving as State Governors during the last Constitutional amendment.

In spite of the huge investment in the water sector by the government and international organisations, water scarcity has grown to become a perennial nightmare for residents of Abeokuta, the Ogun State capital…