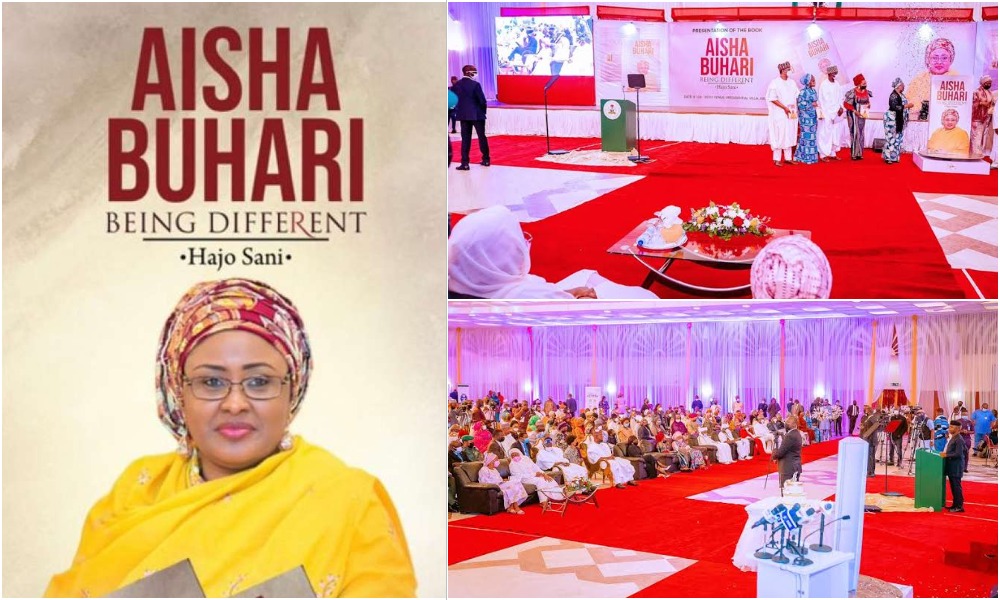 Aisha Buhari, the wife of President Muhammadu Buhari, has received over N216.1m donations from prominent Nigerians during her book launch which was held at the Presidential Villa in Abuja.

The book titled “Aisha Buhari: Being different,” was written by the Senior Special Assistant to the President on Administration and Women Affairs, Dr Hajo Sani.

The launch of the biography on Thursday was well attended by billionaires and prominent Nigerians in honour of the First Lady, Aisha Buhari.

Donations made at the launch of the book were not disclosed, but the hardcover was sold at N30,000, while the soft copy sold for N20,000, according to the organizers of the event.

It was learnt that Africa’s richest man, Aliko Dangote, announced the highest donation of N30m, but he initially declined to make his donation public.

The organisers of the event donated N25m, followed by the Chairman of BUA Group, Alhaji Abdulsamad Rabiu, who bought the book for N25m.

Access Bank Chairman, Herbert Wigwe, bought 15 copies of the book for N15m, While Daniel Chukwudozie, Chairman of Dozi Oil and Gas launched the book with N10m.

Other prominent Nigerians launched the book with a combined amount of N61.1m, with the least donation being N5m. This is based on figures obtained by THE WHISTLER.

The NGF Chairman and Deputy Senate President promised to send an undisclosed amount of money to purchase theirs on behalf of governors and senators respectively.

The launch comes almost 21 days after Aisha Buhari returned to the country from Dubai, ending six months of speculations on her whereabouts.

Meanwhile, President Buhari was absent at the book launch because he travelled to London, the United Kingdom, last week for a routine medical check-up.