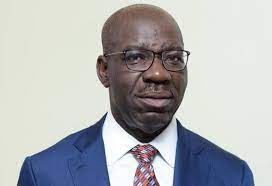 Benin– Edo State chapter of the Peoples Democratic Party (PDP) has congratulated Gov. Godwin Obaseki over his victory at the election petition tribunal, saying, “the party is pleased with the verdict of the Edo 2020 Governorship Election Petition Tribunal which dismissed all four petitions challenging the victory of His Excellency in the September 19, 2020 polls.

According to a statement by the state Publicity Secretary of the party, Chris Osa Nehikhare, “we congratulate H.E. Governor Obaseki for this latest victory.

“The Judgement is a testament to the rule of law, justice and equity. It reinforces the believe that our Judiciary has seriously matured and cannot be manipulated to satisfy the whims and caprices of political jobbers.

“Edo PDP thanks the good people of Edo state for their continued support as well as H.E. Governor Godwin Obaseki for his steadfastness and commitment to resetting Edo.

“It is clear that the APC booby trap of unwarranted, unnecessary, mindless and malicious court cases are collapsing and experiencing the domino effect.