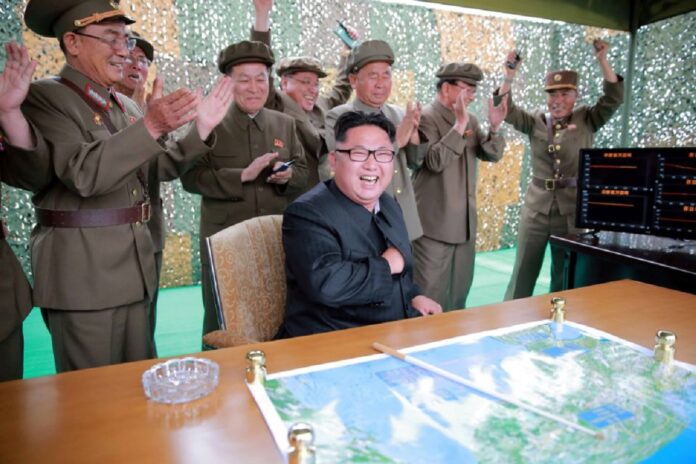 It was the country’s first ballistic missile test in a year and its first provocation to the Biden administration, prompting President Joe Biden to warn that there will be “responses” if North Korea continues to escalate tensions on the Korean Peninsula.

A senior North Korean official, Ri Pyong Chol, replied defiantly Saturday, warning that if the United States keeps making “thoughtless remarks without thinking of the consequences, it may be faced with something that is not good.”

The United States has tried both sanctions and dialogue to persuade North Korea to ​give up its ​nuclear ​weapons programs.

Instead, North Korea​ has rapidly expanded its nuclear program and modernized its missile fleet under Kim Jong Un, the country’s young leader. The expansion of the arsenal is a growing threat to the United States and allies​ in the region. ​Here’s what’s in it.

There are nuclear warheads and more.

North Korea’s ballistic missiles can carry nuclear warheads, and the country conducted six increasingly sophisticated underground nuclear tests between 2006 and 2017. The last four of them happened under Kim.

Its last and most powerful nuclear test was conducted in September 2017, when North Korea claimed to have detonated ​a thermonuclear​, or hydrogen, bomb. ​Estimates of the device’s explosive power ranged from 50 to 300 kilotons.

A mere 100 kilotons would make the test six times as powerful as the bomb dropped on Hiroshima in 1945.​

As of January 2020, North Korea had 30 to 40 nuclear warheads and could produce enough fissile material for six or seven bombs a year, according to an estimate by the Arms Control Association.

Although the world is preoccupied with the North’s nuclear weapons, the country has also stockpiled thousands of tons of chemical and biological​ weapons​ ​agents​ that it can deliver with its missiles​​. When Kim’s estranged half brother, Kim Jong Nam, was assassinated in Kuala Lumpur in 2017, North Korea ​used the internationally banned VX nerve agent in the operation.

​Its missiles can fly longer ranges.

In 2017, North Korea made big strides in its weapons capabilities.

By the end of the year, Kim claimed that his country had the ability to launch a nuclear strike against the continental United States.

After 2017, Kim stopped testing nuclear weapons and long-range missiles, but threatened to end his moratorium when talks with President Donald Trump collapsed in 2019.

During a nighttime military parade last October, North Korea displayed a new, untested ICBM that looked bigger than any of the previous ones.

And at a party congress in January, Kim doubled down on his nuclear arms buildup, offering a laundry list of weapons he said he planned to develop. They included “multi-warhead” nuclear missiles, “hypersonic” missiles, land– and submarine-launched ICBMs that use solid fuel, and “ultramodern tactical nuclear weapons.”

Whether North Korea has mastered the technology needed to send an intercontinental nuclear warhead into space and then guide it back through the earth’s atmosphere to its target is still unclear. North Korea has yet to demonstrate that its warhead can survive the intense heat and friction created by reentry.

Its weapons are getting more sophisticated.

When North Korea resumed missile tests in 2019 following the collapse of the Kim-Trump talks, the tests featured three new weapons, code-named KN-23, KN-24 and KN-25 by outside experts.

Unlike its older missiles that used liquid fuel, all three of the new missiles used solid fuel. The new solid-fuel weapons, mounted on mobile launchers, are easier to transport and hide and take less time to prepare. And at least two of them, KN-23 and KN-24, could perform low-altitude maneuvers, making them harder to intercept.

At a military parade earlier this year, North Korea displayed what looked like a bigger, upgraded version of KN-23. Photos released by the North Korean media indicate that was the weapon tested Thursday.

The new missile was developed to be larger than KN-23 in order to carry a bigger warhead and more fuel.

Kim said in January that his country would also build a nuclear-powered submarine in order to acquire the means to deliver nuclear weapons to its adversaries more stealthily.

North Korea has been testing its Pukguksong submarine-launched ballistic missiles since 2015.

During the military parades held in October and earlier this year, North Korea displayed what looked like two upgraded versions of its Pukguksong submarine-launched ballistic missiles. The country currently has only one submarine that can launch a ballistic missile, but says it is building a new one with greater capabilities.

The arsenal ‘guarantees its success.’

North Korea has one of the largest standing armies in the world, with more than 1 million soldiers. But much of its equipment is old and obsolete, and the military lacks fuel and spare parts.

North Korea has sought to make up for its shortcomings by building nuclear weapons.

Kim justifies his family’s dynastic rule of North Korea by saying that the nuclear arsenal his government has built was a “treasure sword” keeping North Koreans safe from foreign invasion. He tells his people that they are under the constant threat of a U.S. attack.

At the January party congress, Kim said that his weapons program “never precludes diplomacy” but “guarantees its success.” He has also said he no longer holds any expectations for dialogue unless Washington makes an offer that satisfies his government.

It showed that “North Korea was pushing ahead with the plans” set down by Kim during the party meeting, said Kim Dong-yub, a professor at the University of North Korean Studies in Seoul. “As it had stated before, North Korea had no intention of moving first to offer a concession or make a proposal.”