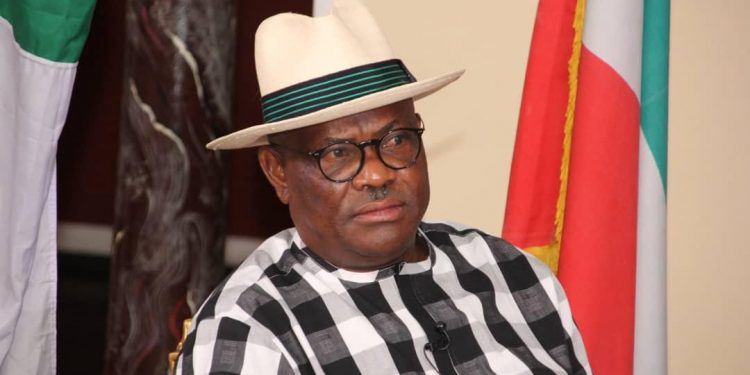 Why I Took COVID-19 Vaccine Quietly – Governor Wike Opens Up

Nyesom Wike, the Governor of Rivers State has confirmed taking the COVID-19 vaccination, dispelling insinuations that he refused to take the vaccine, Sun News reports.

Governor Wike said ahead of resumption of international flights at the Port Harcourt Airport, the state government would dissolve the tribunal set up to prosecute violators of COVID-19 protocol if federal authorities try to influence outcome of cases.

He disclosed taking the vaccine when the Presidential Task Force on COVID-19 delegation led by the National Incident Manager, Dr Mukhtar Muhammad, paid him a courtesy call at the Government House, Port Harcourt, yesterday.

‘Some people said that I did not take my vaccine. I did, but I am not into public show. Taking vaccine is not undertaking any project for anybody to see that you have taken vaccine. It has turned to politics. Assuming what I am taking is not the vaccine? Yes, I can pretend and then they will put it in the news that I have taken the vaccine,’ the governor said.

‘Nigerian like to play politics with everything. They will call the press: Governor this has taken. But, let them not tell you that I have not taken. I did my own in the Government House clinic quietly. So, I don’t need to begin to announce it to the world.’

Governor Wike warned that the state would not hesitate to dissolve the tribunal if federal authorities attend to influence the outcome of any given case before the tribunal.

The governor lauded the PTF Chairman, Mr Boss Mustapha, and members of his team for the good job they have done in containing the spread of COVID-19.

He explained that the N1 billion given to Rivers State by the PTF was managed by the Commissioner for Health and the state government is prepared to account for the fund.

‘We are not people who collect money from the task forrce and divert it. We are not a party to that. We are ready to give account anyday, anytime because that money is public fund,’ he said.

Governor Wike directed the state Commissioner of Transport to give the PTF a 40 seater luxurious bus to convene passengers from the airport to quarantine centre.

He announced that work would immediately commence on the VIP lounge of the Port Harcourt International Airport and the job is expected to be completed within six months.

“As of last week, Rivers has tested about 140,000 persons. You have diagnosed almost 7,000 cases of COVID-19 and the good thing is that over 92 percent of those who were COVID-19 positive have all recovered from the illness.’

Muhammad explained that ahead of the planned resumption of international flights at the Port Harcourt Airport, the PTF has to visit the state to ensure all COVID-19 protocol measures are in place.

He enjoined the state government to arrange for a hotel that would be used as health facility and negotiate for rate that should be affordable for any passenger to pay.

‘We need to identify a health facility which is a hotel where people who do not comply with the protocol will be kept for a period of about eight days pending which they will be tested for COVID-19, and if they are negative they will be allowed to go, but if they are positive we will keep them in isolation facility.’

The PTF requested the state government to help beef up security at the airport and quarantine facility so that any person of concern do not escape and endanger the health of the public.

Citing the recent Health Protection Regulation order signed by President Muhammadu Buhari which empowers state government authorities and security agencies to arrest and prosecute people who violate the COVID-19 protocols, the PTF urged Governor Wike to set up a tribunal that would handle cases of persons who jump quarantine.

‘COVID-19 is something that we are all determined to work hard to limit the spread and also the infection and ensure many people in our states receive vaccination and develop immune to resist the disease,’ he said.