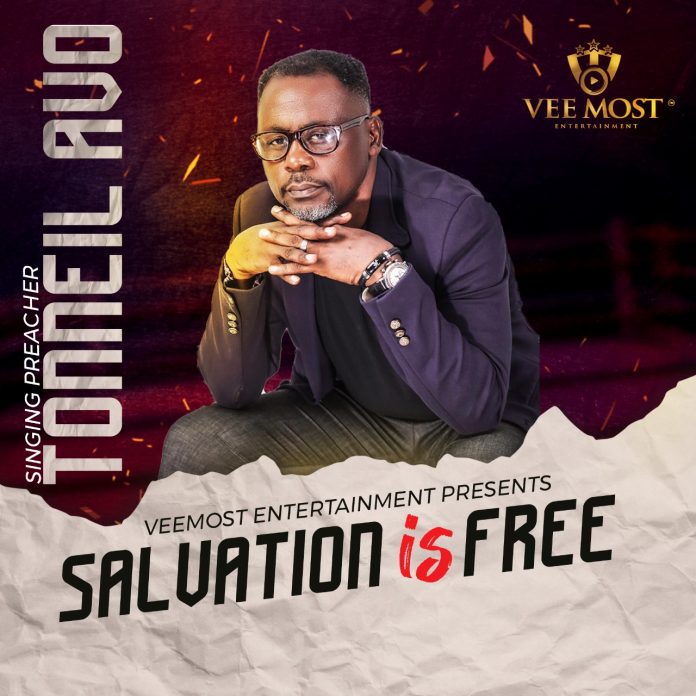 Mr. Chuwuemeka Kpadobi aka Tonneil Avo a gospel artiste with a vast experience in many genre of music settings, but majors in  gospel music fused with reggae, has stated his resolve to up his stake in the industry.

In a chat with newsmen Kpadobi reveals his stance on spirituality and salvation.

Speaking on his new album, tagged: ‘Salvation is free,’ and presented by Veemost Entertainment, Kpadobi who is a gospel reggae artiste, said: “[email protected] fusion is my brand of reggae. It’s reggae without ganja, cocaine, nor any kind of hard drug at work in man. In the place of ganja or any hard drug, I replace it with the spirit of Christ. In the place of Patua, I replace it with the word of God. My discovery is this; in ganja you only feel high for a season but in the spirit of Christ, your highness has no time and season or limitations. I call that anointing and l tell you the truth you can’t go higher than the most high.

“Reggae music ticks like the human heart and it carries a high level of spirituality with a freedom effect.

“Be it political, social, religious, spiritual, reggae music heals and it’s highly spiritual with a unifying force in bringing people together beyond their differences and it’s a perfect code to download eternity to time.

“Therefore, Reggae Music is my code but Jesus remains my focus.”

Speaking on what inspires him, Kpadobi said God and His creations inspire him.

“The song; “Salvation is Free” explains a lot. God took our place and paid a price we could not pay, while we were yet his enemy. What an amazing grace.

He added that his works cut across all age level, be it the teens, youth, matured and the elderly, and children.

He stated that his songs are laced with heavy lyrics and spiritual depth, yet simple, and that it’s an antidote to those who are at the edge of giving up in life, or struggling over some challenging issues like drugs, marital hiccups, sickness, stress, spiritual attacks, poverty among others.

“In fact some of my fans call my songs; “Anti-Depressant” as they listen in the place of meditation, relaxation and through their daily routine.

“You’ll find most of those songs in my second album; “Tetimonies.” During lockdown, another fan of mine based in the UK played the song online back to back and cued into the anointing and drew strength, hope and joy to move on through those trying times to the glory of God.

“And this song; “Salvation is Free” became an eye opener that Jesus Christ got our back always. The good news is that it’s danceable, infotaining, entertaining, soul refreshing and it heals,” he said.

He might not be your regular gospel artiste, Chukwuemeka Kpadobi aka Tonneil Avo is multifaceted, he is an artiste, a producer, songwriter, instrumentalist, music director, and preacher, and many more.

Popularly known as the singing preacher, because of how he uses biblical scriptures to create lyrics and rhyme, Kpadobi’s sojourn into the music industry began three decades ago out of which he spent 13 years on the secular stage.

The brain behind ‘Gold from fire,” “Testimonies,” “The 6th Verse” and “Sweet Sacrifice albums among other singles, had rolled with the late Majek Fashek, Ras Kimono, Oliver de Coque and Daniel Wilson.

Kpadobi is being promoted by a foremost entertainment company in Nigeria, VeeMost Entertainment.