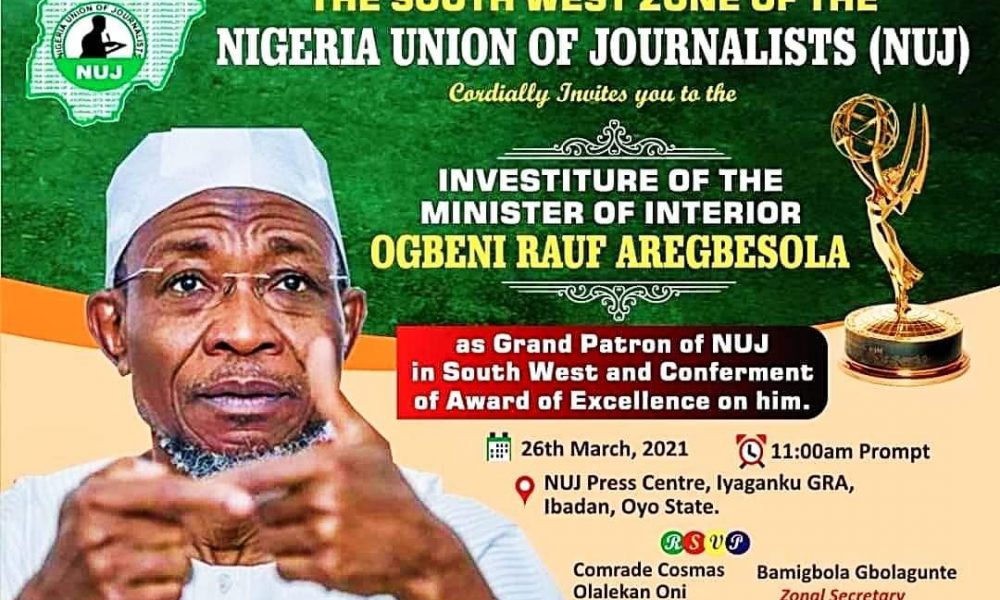 Controversies have continued to trail the proposed Investiture of the Minister of Interior, Ogbeni Rauf Aregbesola, as the Grand Patron of Nigeria Union of Journalists (NUJ) in the South West over reservations expressed by the six state council chairmen in the zone about the justification for the award.

Recall that the union at its zonal meeting of 12th March, 2021, had agreed to put the proposed Investiture on hold following the leadership crisis in the zone which has been refferd to the National Executive Council of the Union.

According to the information, those who were to be honoured alongside Aregbesola includes Oyo State Governor, Seyi Makinde, Olowu of Kuta, Oba Adekunle Makama among others but the union agreed to postpone the award ceremony pending the resolution of NEC on the issue and other sundry issues within the zone.

News Direct earlier reported that the national body of the NUJ also frowned at the move of its South West  zone and had ordered suspension of the activities.

But against this decision, a flier suddenly surfaced on the social media, purportedly endorsed by Bamigbola Gbolagunte, who claimed to be Acting Vice-president and later Zonal Secretary of the zone, saying the event has been slated for 25th March, 2021, at NUJ Press Centre, Iyaganku, the capital of Oyo State.

While scores of political associates of the former Osun State Governor have been celebrating the proposed investiture on different social media platforms, the six states that constitute the zonal wing of the union in the South West have unanimously distanced self from such event.

As at the time of filling this report, it is not clear if the event will still hold with opposition of Oyo state council to the Investiture. It was learnt that the Iyaganku NUJ Press Centre which was earlier scheduled as the venue was not approved and had equally directed its members not to participate in the event.

It was learnt that the six state chairmen have resolved not to attend the award and recognize the Investiture if the Vice President and the Zonal Secretary insisted to proceed with the award.

An associate of the Interior Minister however, hinted that the venue of the proposed event had been changed from NUJ Press Centre in Ibadan to Premier Hotel located in the metropolis .Meanwhile, some civil society organisations have expressed reservations over the proposed investiture, calling on the leadership of NUJ in the zone to tread with caution.

An NGO, Advocacy for Media Rights, on Wednesday described the proposed investiture as perceptional error on the part of the union, insisting that the personality of Aregbesola in the public gauge deserves nothing of such recognition .

This was contained in a press statement signed by the National Coordinator of the organization, Comrade Tolu Fatukasi, the copy which was made available to newsmen in Ibadan.

According to the group, the investiture of an individual as the Grand Patron of a noble union like NUJ should be predicated on established media friendliness and consistent solidarity to the union by such person.

The statement read in part”, While the position of a Grand Patron of any layer of the union is acceptable and within the ambit of the union’s constitution, the mode of selection of whoever wants to take the position should be moderate and decent.

“We are indeed taken aback at the mention of Rauf Aregbesola’s name for the proposed investiture as the Grand Patron of NUJ in the South West.

“As a Media Rights group, we have the details of Aregbesola’s strained relationship with the media throughout his two term tenure in office as governor in Osun State.

“Aregbesola was the first governor in the Nigeria’s fourth republic to have publicly declared journalists as personal non grata and enemies of state.

“This is the man who established a local newspaper called “Osun Defender” to covertly project his political interest and upon realising his ambition, he threw journalists working in the firm out with disdain.

“By all standards, it is obvious such a personality does not fit into the category of individuals with credentials for Grand Patron of the NUJ in any cluster whatsoever”.

“You can imagine the desperation of the Minister and his handlers, when they realised that the consensus of the leadership of the union in the South West was to cancel the event, they now wanted to organise a kangaroo investiture somewhere else in connivance with two dissidents parading themselves as leaders of the union in the zone”.