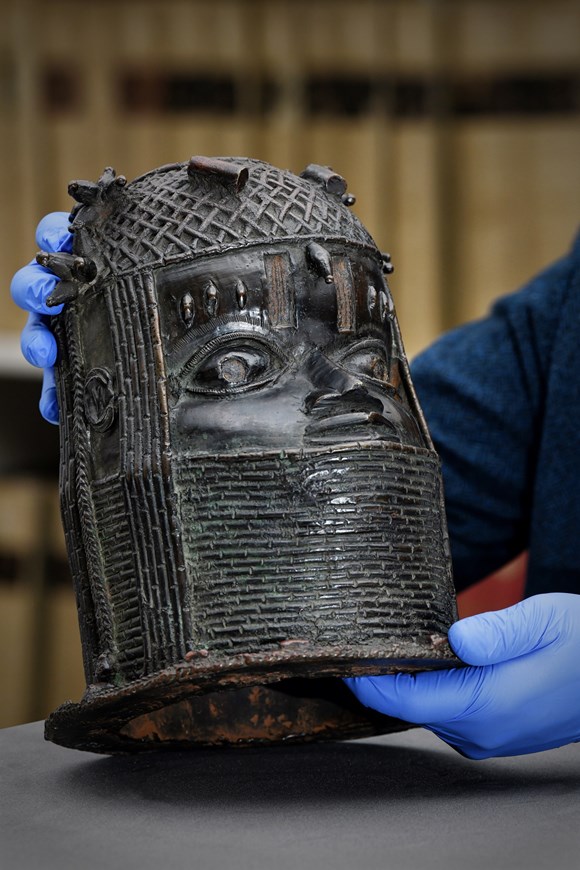 University of Aberdeen to return stolen bronze sculpture to Benin

Below is the press statement from the University

The University of Aberdeen is to return a Benin bronze – a sculpture looted by British soldiers in Nigeria in one of the most notorious examples of the pillaging of cultural treasures associated with 19th century European colonial expansion.

Thousands of metal and ivory sculptures and carvings were looted by British forces in 1897 during the destruction of Benin City in present-day Nigeria by a British military expedition.

Many of the soldiers and administrators involved sold Benin objects to museums or private collectors. Others were later given as gifts to museums or sold at auction or by art dealers.

Over the last 40 years there have been growing calls for the return of such items, which have become symbols of injustice.

A number of museums have been discussing the Benin bronzes in their collections and are supporting the creation of the Edo Museum of West African Art in Benin City to display the returned items under agreements wrought by all parties.

The University of Aberdeen instigated a conversation through Professor Bankole Sodipo, Professor of Law in Babcock University, Nigeria with the National Commission for Museums and Monuments of Nigeria through its Legal Adviser, Babatunde Adebiyi, the Edo State Government through the then Attorney-General and Commissioner for Justice, Professor Yinka Omorogbe and the Royal Court of the Oba of Benin through Prince Professor Gregory Akenzua in 2020.

The Nigerian Federal Government gave its backing through the Federal Ministry of Information and Culture and its Minister, Alhaji Lai Mohammed.

This conversation has now led to the University of Aberdeen becoming the first institution to agree to the full repatriation from a museum of a Benin bronze.

The bronze sculpture depicting an Oba (king) of Benin was acquired by the University in 1957 at an auction and is considered a superb example of Benin Late Period Art.

Benin City was the centre of a powerful and long-lasting kingdom in West Africa of the Edo people, renowned for its tradition of high-quality metalworking from at least the 17th century.

The expansion of British trade and colonial control in the later 19th century brought it into conflict with the kingdom of Benin, ultimately leading, in 1897, to the city being attacked and destroyed by a British military expedition, the “Benin Punitive Expedition”, with many inhabitants killed. The royal palace was burned and looted, and the Oba, Ovonramwen Nogbaisi, exiled.

The thousands of religious and cultural treasures seized have become known as the Benin bronzes.

Neil Curtis, Head of Museums and Special Collections said “The University of Aberdeen has previously agreed to repatriate sacred items and ancestral remains to Canada, Australia and New Zealand, and has a procedure that considers requests in consultation with claimants.

“An ongoing review of the collections identified the Head of an Oba as having been acquired in a way that we now consider to have been extremely immoral, so we took a proactive approach to identify the appropriate people to discuss what to do.”

An expert panel, including academic specialists and curators, as well as representatives of the University Court, the Hunterian Museum in the University of Glasgow and the Nigerian claimants, discussed the proposal in detail and unanimously recommended its return to Nigeria.

On Tuesday the University’s governing body supported the unconditional return of the Benin bronze to Nigeria.

Professor George Boyne, Principal and Vice-Chancellor of the University of Aberdeen said: “I welcome the decision of the University of Aberdeen Court to support the return of the Benin bronze. This is in line with our values as an international, inclusive university and our foundational purpose of being open to all and dedicated to the pursuit of truth in the service of others.

“It would not have been right to have retained an item of such great cultural importance that was acquired in such reprehensible circumstances. We therefore decided that an unconditional return is the most appropriate action we can take, and are grateful for the close collaboration with our partners in Nigeria.”

Alhaji Lai Mohammed, the Minister of Information and Culture of Nigeria said: “The reaching out by the University of Aberdeen and eventual release of the priceless antiquity is a step in the right direction. Other holders of Nigerian antiquity ought to emulate this to bring fairness to the burning issue of repatriation”.

The Director-General of the National Commission for Museums and Monuments, Professor Abba Issa Tijani said that: “the world looks forward to further release of other purloined Nigerian antiquities to the Nigerian nation. Not just Benin bronzes, but the Ife, Nok, Esie, Owo and other Nigerian ancient arts. We welcome collaborations and agreements of all sorts. We love the fact that others cherish these great art-works. International travelling exhibitions of these art-works is part of what we offer the world”.

The University is now making practical arrangements for the return of the Head of an Oba, and collaborating in organising a celebratory event to mark its return home.

The proposed Edo Museum of West African Art being championed by Godwin Obaseki, the current Governor of Edo State in Nigeria where the ancient kingdom of Benin falls. This modern museum will be part of an unprecedented cultural hub that will include this museum and other cultural heritage infrastructure including the Oba’s Palace.

It is being executed through the establishment of an independent trust (The Legacy Restoration Trust) established by the Edo State Governement in collaboration with the National Commission for Museums and Monuments, and the Royal Benin Palace. This cultural hub is designed by the eminent architect, Sir David Adjaye. This Benin bronze being returned will ultimately be housed in this proposed museum.

The Governor of Edo State stated, “I am looking forward to working with the Legacy Restoration Trust, the National Commission for Museums and Monuments, the Royal Palace and the University of Aberdeen  to ensure that this object is returned safely and securely, and eventually housed in the Edo Museum of West African Art.”