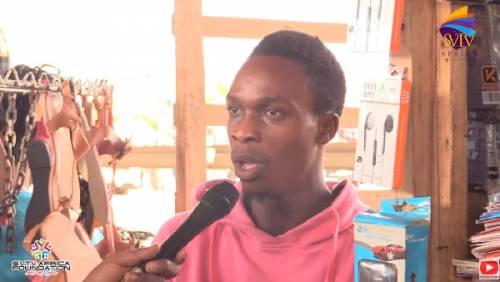 Moses Harry, a Nigerian immigrant, has explained why he chose to migrate to Ghana illegally rather than remain in Nigeria, according to SaharaReporters.

Harry, in an interview with SVTV Africa’s DJ Nyaami, said he had come to Ghana to secure a job, through his elder brother who had been in Ghana for close to two years.

He said he preferred Ghana to Nigeria due to the value of Ghanaian cedi and would rather remain there though he had yet to get his papers.

Harry, who was working as an electrician in Nigeria said he had to leave because he was not earning enough for his upkeep.

He said, “I am Moses Emmanuel Harry from Akwa Ibom State. I came to Ghana to start a business with my brother, this is my brother’s business though, he is using this to put me through so I can start my own business too.

“I could have switched jobs but I already made up my mind to come to Ghana. I love my country but the leaders are turning it into something else, making the country hard for everyone. I came to Ghana on February 4 this year. Ghana cedi is more valuable than Nigerian money. The value of Ghana money is twice that of the naira.”

Speaking on his trip to Ghana despite the lockdown and ban on inter-country travel, he said he got to Ghana alongside 11 others via a ship.
According to him, he paid about N60, 000 to the travel agent, who took them through a lot of shortcuts both on land and sea. He described it as a ‘fun trip’.

“It was fun getting to Ghana, there was a mann he is my namesake. His name is Moses, and he tried to convince me that when I want, he will take me to Ghana. Though the border was closed, we passed many shortcuts. First of all, we boarded a ship, there were many of us. We were in an ocean, the ladies were scared but I was not. I was sitting comfortably there because it was fun. After the ship, we got to a place like Togo or Benin Republic where we saw a cab, we entered the cab; we boarded about four cabs before we got to Ghana.

Harry said there were immigration officers in about 10 spots on the sea, who were ‘settled’ by the travel agent.

Harry said his brother promised to get him a job in Ghana but since he came, his brother had told him to focus on starting a business that is profitable in Ghana.

“Ghana is cool. I have not been everywhere, just in this area. The arrangement I had with my brother was when I get to Ghana, he will get me a job but he said I should do business instead, that I will not be satisfied with a job. He said business is good in Ghana. Once I learn very well, I will start mine.

“But I’m not that good at business but if I get a job, I will do it well because I am a very hardgworking man. So far you pay me my money; I am okay with a job. I can’t go back to Nigeria because I have to complete this thing I have started. I love Ghana. I prefer Ghana to Nigeria; I will get my papers very soon,” he said.

When asked if he could venture into internet fraud like some young Nigerians in Ghana, Harry said he would never do that.

“I can never be into internet fraud because that is not my line. I don’t like it, I have been into it before but I had to stop, my people will disown me for that and my conscience will condemn me.

“When I see people doing fraud, I feel it is their luck but it is not good to cheat your fellow human being to get money,” he said.