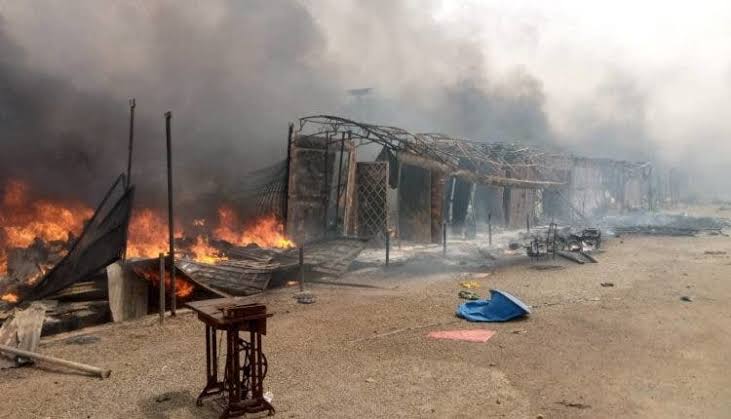 Katsina State main market, popularly called Central Market, was on Monday morning gutted by fire and properties worth millions of naira were believed to have been lost during the incident.

It was learnt that the inferno started around 8am. and continued to ravage shops at the market, as some yet to be affected traders trooped out to evacuate their goods before the raging fire reached their shops.

The source of the incident and level of damage could not be ascertained as at press time, but some eyewitnesses said that hundreds of shups were burnt to ashes.

A combined team of Katsina State Fire Service, Federal Fire Service and the State Emergency Management Agency (SEMA) were battling to put out the fire.

The men of the Nigerian Police, Federal Road Safety Corps (FRSC), and Nigerian Security and Civil Defence Corps (NSCDC) were also on hand to maintain safety and security.

Below are some photos and videos from the scene.

Innalillahi wa’inna ilaihirraji’un we are soliciting for your prayers pls🙏🏻😭 fire 🔥 out break just now in katsina central market all our work place is still on fire. we need ur prayers dan Allah🙏🏻🙏🏻🙏🏻 pic.twitter.com/P8r5ClxAQ1

Four hours after the fire outbreak at Katsina Central Market, fire fighters are still battling to put off the inferno which destroyed unspecified number of shops and stalls.

No life was lost, property and cash worth millions of naira were destroyed. pic.twitter.com/LbNwYRrZcG

News reaching us on the fire outbreak at Katsina Central Market, with goods worth millions consumed and so many shops burnt down to ashes. May God replace the lost wealth and grant the owners and Katsina people the strength to bear the lose! pic.twitter.com/KB80aPZVzD

Innalillahi katsina central market is on fire out break 🔥🔥🔥ya allah grant them patient to bear the loses and brought them best to occupied their losses Ameen .. pic.twitter.com/xE8qiIO0a1