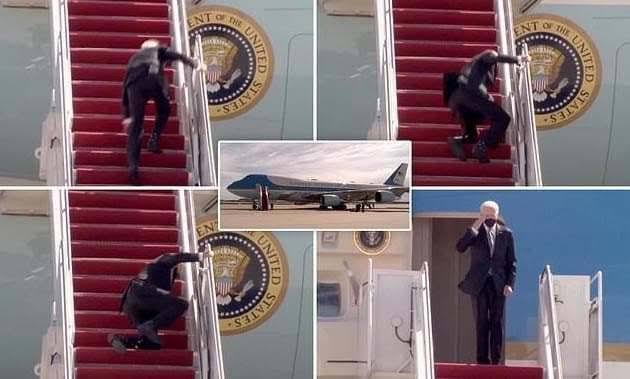 The President of the United States, Joe Biden, stumbled upon a staircase three times while trying to board the Air Force One presidential aircraft on Friday.

The incident happened when the 78-year-old President was heading to Atlanta where he is expected to meet Asian-American community leaders following the mass firing at a parlour earlier this week.

In a viral video, Biden was seen boarding the aircraft at Joint Base Andrews just before Friday noon when he stumbled. He gripped on to the railing, steadied himself and kept going but lost his footing a second time and then a third.

On the third trip, he fell to his knees. He got back up then carried on up the stairs before giving a salute at the top then disappearing into the aircraft.

Reacting to the incident, the White House blamed Biden falling on the windy weather and insisted he is ‘100 percent fine’.

Karine Jean-Pierre, the deputy White House press secretary, told reporters on Air Force One: “It’s very windy. I almost fell coming up the steps myself. He is doing 100% fine.”

Asked if the president was checked by a doctor, Jean-Pierre said only: “I just – all I know is – I can tell you is he’s doing fine. He’s doing great.”

White House communications director, Kate Bedingfield, also tweeted that Biden did not require any attention from the medical team on board.

I know folks have seen that President Biden slipped on his way up the stairs to AF1, but I’m happy to report that he is just fine and did not even require any attention from the medical team who travels with him.  Nothing more than a misstep on the stairs.

78-year-old Biden is the oldest person to become president. In November, he also suffered a hairline fracture of his right foot while playing with one of his dogs.

The incident comes barely 48 hours after Russian President, Vladimir Putin, reacted to a statement credited to Joe Biden, who called him a “killer”.