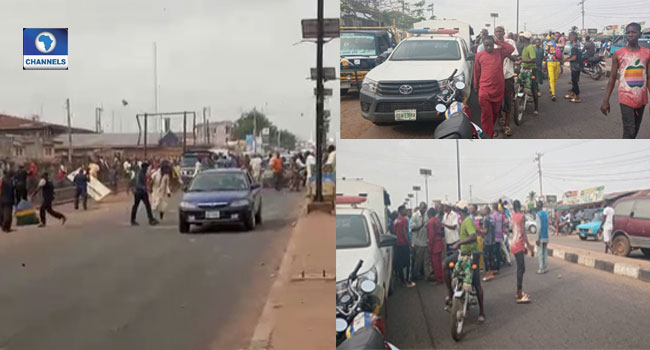 Aleast three people sustained varying degrees of injury during a clash between Muslims and Christians on Wednesday in Ilorin, Kwara State.

The violence started on Wednesday morning after Kwara Government reopened 10 schools that were shutdown last month over the use of hijab by Muslim female students.

Kwara government had approved the use of hijab by Muslim schoolgirls in all public schools in the state, but Christian institutions kicked against it openly, insisting that they will not allow such in their mission schools.

The government had earlier in February ordered the temporary closure of ten schools pending the resolution of the controversy in the schools.

The affected schools were established by Christian missionaries, but now funded by the state government after a forceful takeover of all mission schools in the country in 1975 by the Nigerian government.

The Christians angered by the situation said the government should wait for the outcome of the judgement of the Supreme Court before fully taking over the schools.

Although the ownership of the ten schools is still pending in the Supreme Court, Kwara Government announced the reopening of the school on Tuesday night.

The decision did not go down well with the Christian leaders who kicked against it and urged its members “to occupy the schools” when they reopen today in protest of the government’s resolution.

Violence erupted on Wednesday after Christian officials of Baptist School, Surulere disallowed the girls in Hijab from gaining access into the school.

This did not go down well with Muslim parents, leading to arguments and eventual clash between members of both faith over the use of hijab.

The situation grew worse as angry Christian and Muslim faithful threw various objects including stones and plastic chairs at themselves.

The security operatives close to the school had to call for reinforcement to calm the situation. The operatives dispersed them with tear gas.

Imagine what a peaceful protest was turned into, having to jump over the fence of your property to get treatment.
Kwara Government should stop marginalization of Christians in the state. pic.twitter.com/XNcGTUzIyR

For those arguing and defending what not. Do you even know the law pic.twitter.com/pO3NGXXLTY

Is it crime to say No Hijabs in Christians Missionaries Schools, Kwara? Why can’t they both agree with the norm by using beret?pic.twitter.com/dsRJS0ucn8

Violence erupted on Wednesday in Ilorin, Kwara State capital after the state government reopened 10 schools shut last month over the use of hijab by Muslim female students. pic.twitter.com/NGZFhVBrav

Outburst as Christians and Muslims Clash in Kwara over Hijab crisis. pic.twitter.com/ilLdhPjobh

KanyiDaily recalls that the Sultan of Sokoto, Muhammad Sa’ad Abubakar III had said he’s looking forward to a better Nigeria where Muslims are allowed to wear hijab anywhere without restriction.