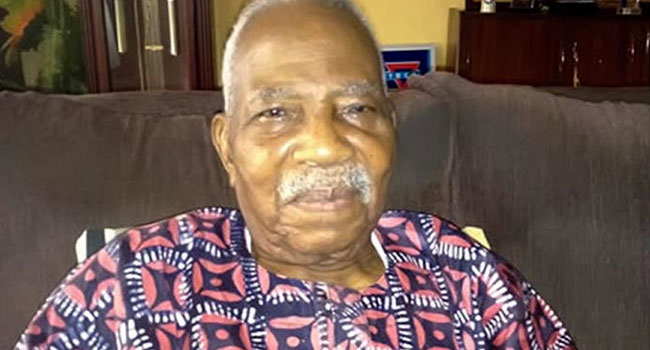 Fasoranti steps down as Afenifere leader

Elder statesman, Chief Reuben Fasoranti has stepped down from the position of National Leader of the Pan Yoruba Socio-Political Group, Afenifere.

Pa Fasoranti, aged 95 years disclosed this during the group’s monthly meeting at his residence in Akure, Ondo State capital.

The nonagenarian named the former deputy leader of the group, Chief Ayo Adebanjo as the acting national leader.

Pa Fasoranti disclosed that the decision to step down as the leader of Afenifere was due to the fact that there was a need to improve organisation and combat invasion of culture.

He said his age won’t enable him to accomplish such, only an active leadership can.

READ ALSO: Grab The Opportunity To Be At Centre Of Nigeria’s Politics, Ahmad Lawan Tells Igbos

“The group needs more than ever before to have an improved organisation with a more effective approach to combat the monstrous invasion of our culture and pride as a people.

“Only a more alike and active leadership can achieve this. At 95 I am hardly able to provide such and so it is time for me to step aside.

“At this junction, I am proud to announce Chief Ayo Adebanjo a politician of the Awolowo school of thought as Acting leader”, he added.

Afenifere was formed as a socio-cultural organization for the Yoruba people of Nigeria, with Chief Abraham Adesanya as its leader and Chief Bola Ige as deputy leader.

When the Alliance for Democracy (AD) political party was formed in 1998, it took the Afenifere agenda as its official manifesto.