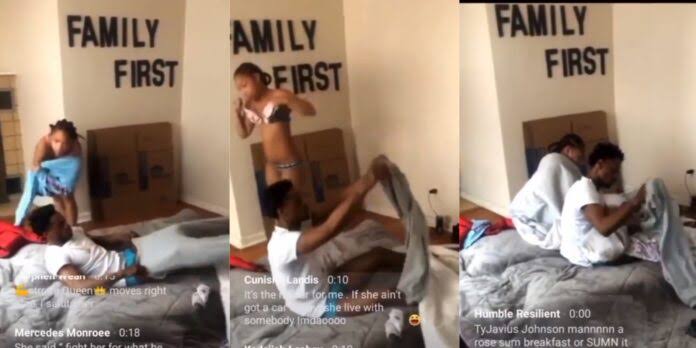 A video has emerged online showing the moment a young lady caught her boyfriend red-handed sleeping with another woman in her old house in United States.

In the viral video, the young man and his lover could be seen wearing their outfits after his girlfriend walked up on them while they were having fun.

The distraught lady was heard speaking in the background as if they ain’t worth her time. Though she made remarks of them having sex on the floor with her blanket.

She said the reason why she didn’t attack the woman she caught with her boyfriend was because she doesn’t know her and she has dumped the man.

The lady mocked the lovers as she threw them out of her old apartment.

KanyiDaily had also reported how a Nigerian singer, Terry Apala, was caught red-handed cheating by his pregnant girlfriend, cheating on her with another lady he claimed was his cousin.