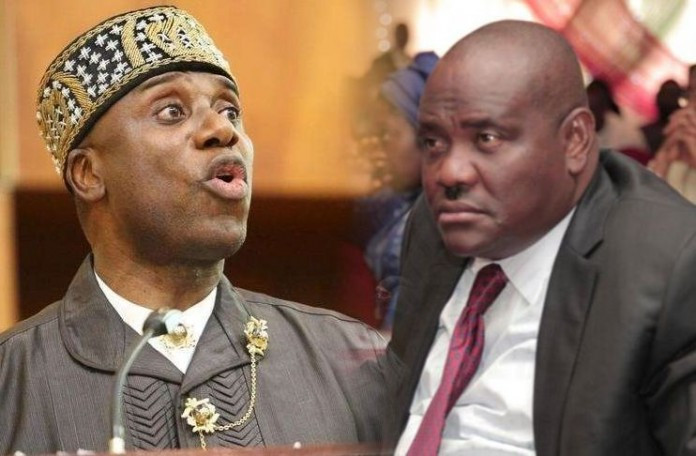 “Nyesom Wike Was My Staff, I Can’t Bring Myself Low To His Level” – Rotimi Amaechi

The Minister of Transportation, Rotimi Amaechi, who was former Governor of Rivers State, has said that it’s an insult for him to react to the allegations of corruption levelled against him by his successor, Governor Nyesom Wike.

For some years, Amaechi of the All Progressives Congress (APC) and Wike of the Peoples Democratic Party (PDP} have not been in good terms over certain political issues that concern the state.

Wike, who served as Amaechi’s Chief of Staff before they fell apart, has repeatedly accused his predecessor of corruption and stealing the resources of oil-rich Rivers.

On Wednesday, Wike accused the APC-led Federal Government of shielding Amaechi from prosecution over misappropriation of proceeds from the sales of some state assets.

Reacting to the allegations on Arise TV programme on Thursday, Amaechi said he don’t want to exchange words with Wike whom he has surpassed on all levels.

“I don’t think I want to address the issue of the governor, I have made my point and I have moved on,” Amaechi said.

“He was my Chief of Staff, I can’t bring myself low. I was a governor, I was also a speaker, I’m a minister. I was two-term chairman of governors’ forum. The same when I was a speaker. Why should I be discussing him?” Amaechi barked.

Amaechi was also quizzed about labelling Wike a “drunk”, but he denied the allegation.

“I only said that I don’t make statements under the influence of alcohol. Some people are attaching meaning to what I said,” he added.

KanyiDaily recalls that Wike and Amaechi had recently engaged in a verbal fight at the burial of a former Justice of the Supreme Court, Adolphus Karibi-Whyte, in the Abonnema, Akuku-Toru Local Government Area of the state.