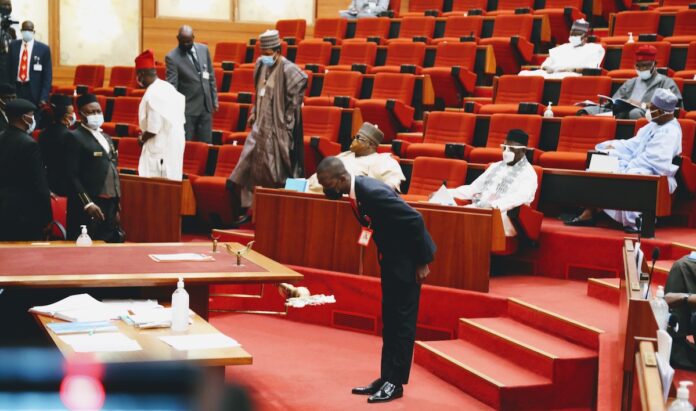 The ongoing trial of Abubakar Ali Peters and his company, Nadabo Energy Limited, for an alleged N1.4bn fraud before Justice C.A. Balogun of the Lagos State High Court sitting in Ikeja, Lagos, continued today, Wednesday, March 10, 2021, with Abdulrasheed Bawa, Chairman of the Economic and Financial Crimes Commission, EFCC, making history as the first chairman of the Commission to give evidence in Court.

Bawa, who is testifying as the fifth prosecution witness, PW5, had begun his examination-in-chief on June 3, 2015 long before his appointment as the EFCC Chairman.

Before today’s proceedings, Bawa had given evidence against the defendants,  who pleaded “not guilty” to the alleged fraud, stating  that Nababo Energy Limited allegedly obtained the sum of N1,464,961,978.24 from the Federal Government as oil subsidy with forged documents.

Bawa had also told the Court that, after studying the documents submitted to the Petroleum Products Pricing Regulatory Agency, PPPRA, where the defendants claimed they imported about 14,000 metric tonnes of premium motor spirit, PMS, the EFCC conducted investigation, which revealed the contrary.

At the last sitting on February 23, 2021, Justice Balogun had admitted in evidence an email correspondence between Bawa and Ullrich Afini Awani of Global Commodities African as well as the Certificate of Identification.

At the resumed sitting today, Bawa, while being led in evidence by S.K. Atteh, further gave insights into the alleged fraudulent activities exposed by the investigation.

He said: “The email correspondences were analysed and we found out that the defendant, contrary to their claim, took about 6million litres of PMS on board MT St Vanessa and the same quantity from the mother vessel, MT Eviridiki, into their own chartered vessel MT St Vanessa.

“The email further confirmed that the same quantity was discharged at Port Harcourt.

“The email also showed that one Mr. Jide Ofor Akpan was the agent of the vessel i.e. MT St. Vanessa.”

He further told the court that, in furtherance of the investigation, Akpan was invited for questioning, where he confirmed that the first defendant, Nadabo Oil and Gas, through the second defendant, Ali Peters, chartered the vessel, MT St. Vanessa, and also paid for it.

Bawa added that Akpan was confronted with the “purported shipping documents” that the defendant submitted to the PPPRA for payment of subsidy.

According to him,”He confirmed to us that the vessel, Vanessa, has nothing to do with MT American Express, which is the vessel which the defendant claimed to have given product to his own vessel, but that the St Vanessa loaded product from MT Eviridiki.”

Giving further evidence, Bawa said the EFCC wrote a letter of investigation activities to Petrocam, the traders who supplied the defendant the actual product that they imported, requesting that they furnish the Commission with all the financial and shipping documents with respect to the transaction under investigation.

Bawa, who told the court that Petrocam responded accordingly, thereafter, identified the letter from the EFCC to Petrocam as well as the response received.

When the prosecution sought to tender the documents as evidence, the defence team, led by E.O. Isiramen, raised objections to the admissibility of the documents, which included Proforma Invoice, Commercial Invoice, letter of credit and other documents relating to the transaction.

The defence also raised objections to the admissibility of the response from the Corporate Affairs Commission, CAC, with respect to the investigation of the company, which the prosecution also sought to tender against the defendant.

After listening to both parties Justice Balogun adjourned till April 28 and 29, 2021 for “ruling and