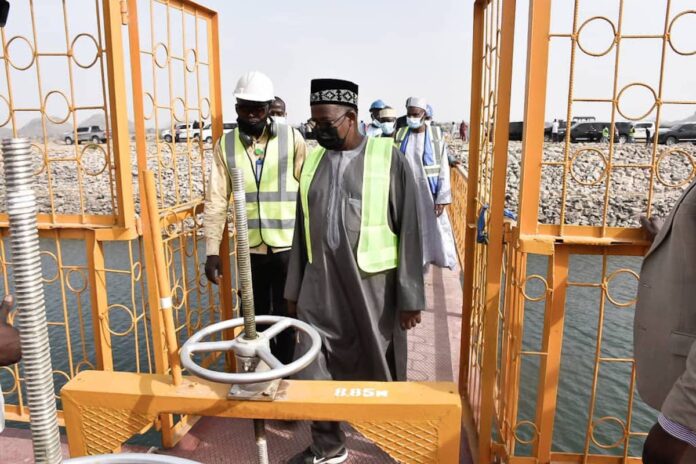 Bauchi State Governor Senator Bala Mohammed Abdulkafir  has apologized to the people of Bauchi metropolis for not getting the required portable water to meet their daily needs due to the rehabilitation and expansion work going on at the Gubi water Treatment Plant, assuring that work has reached 95 percent completion and water would soon run through the pipes.

The Governor, while explaining that though the State Urban Water and Sewerage Corporation (BSUWSC) has on daily basis been supplying water by use of Water tankers to the people, but that was not enough to meet their needs, hence the plea for them to exercise patience as the project is about to be completed.

Bala  was speaking at Gubi Water Treatment Plant in continuation of his projects supervision and inspection tour across the state, said his administration is poised to provide portable drinking water to not only the inhabitants of Bauchi metropolis, but the entire people of the state.

The Governor said that the state government is considering the possibility for the use of abandoned Waya dam being constructed by the Upper Benue River Basin Authority (UBRBDA) to enhance the provision of water supply to the people.

Under the proposed Waya dam programme, the governor said, a new water treatment plant is to be constructed to ensure that Bauchi and its environs enjoy adequate portable water supply to improve the quality of life of the people who voted him into power.

Bala said, “My problem is how to get the use of Waya dam so that we can build an additional water treatment plant in such a way that we can provide water to the people of Bauchi for the next 100 years”.

“When we came to power in 2019, it was only six months left for the World Bank water rehabilitation and expansion project and work was not done up to 10 percent. I therefore commended the management and World Bank for giving us the assistance to look inward and re-arrange the tenure to another one year, and that how we were able to come to the end of this project”.

The Governor assured that the state government has gotten value for money, and assured the people that a facility has been produced that will work for the next 15 years as, according to him, most people are not dependent on the water being supplied by the government.

Earlier while receiving the Governor, the Managing Director of the state water corporation, Aliyu Aminu Gital said that the enhanced water supply from 45 million to 75 million litres of water daily will provide adequate water to Bauchi metropolis up to the year 2027 without any hitch.

Gital recalled that the project which started in February 2015 would be concluded this March, 2021, giving the initial cost as $65 million, which was now depreciated to $58.72 million attributable to COVID-19 pandemic.

The Managing Director assured that the corporation has overcome almost all its challenges with an outstanding supply of some helix pumps which are now cleared at the Lagos sea port for delivery to Bauchi, and have virtually utilized the funds of the project.