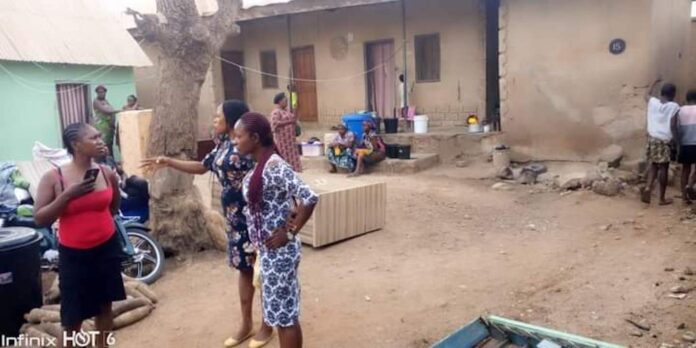 An eight – room apartment at No. 17, Kitchner Street, G.R.A Gboko belonging to one Mr.  Emmanuel Iorbee was razed by fire in the early hours of today.

The inferno destroyed properties valued at over N15 million naira.

According to eye witness account from younger sister to Iorbee, Hembafan Iorbee, Occupants of the house noticed a sudden eruption of fire from one of the rooms at about 3am and raised the alarm which attracted neighbours to the scene.

The cause of the fire outbreak was not known at press time but it was suspected to have resulted from electrical fault in one of the rooms.

She stated that all attempts by neighbours to help put out the fire proved abortive as they watched helplessly as the rampaging fire devoured the house with its entire contents.

Hembafan further stated that most Occupants of the house were awaken by the fire which threw them in confusion and were more preoccupied with saving lives than evacuating properties out of the house.

Hembafan however commended the Gboko Fire Service station for their prompt response and professionalism without which neighbouring houses would have been reduced to rubbles.

She called on Gboko Local Government and the Benue state Government to come to their aid to cushion the effect of the inferno on the victims.

Commenting on the incident, the Secretary, Gboko Local Government Council, Hon. Ben-king Atighir regretted the monumental damage caused by the inferno which he said, had rendered the victims homeless.

He called on the people to always remember to put off all electrical appliances while leaving home.

In his remarks, the Chairman, Committee on fire prevention and control, Gboko Local Government Area, Hon sympathised with the victims but called on the people to always remember to put off all electrical appliances while asleep to avoid the devastating effect of fire outbreak on their household.

It will be recalled that the Executive Chairman, Gboko Local Government Council, Hon. James Kachina James had two days ago inaugurated a fire prevention and control committee to sensitize the people of fire prevention, management and control to avert the many incidences of fire outbreak in Gboko.