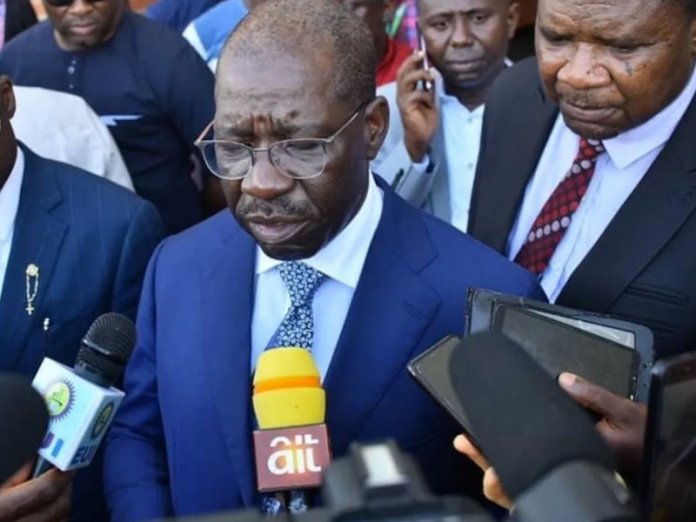 Edo State Governor, Mr. Godwin Obaseki, at the weekend, said he held no personal grudges against his predecessor and former chairman of the All Progressives Congress (APC), Comrade Adams Oshiomhole, but only disliked his style of politics.

Obaseki disclosed this to journalists in Auchi, Etsako-West Local Government Area of the state, at the Centenary Birthday Thanksgiving of Msgr. Thomas Oleghe and 18th Canonical Erection Anniversary of the Diocese of Auchi held at the Immaculate Conception Cathedral in Auchi.
Obaseki, who exchanged elbow-bumps with his predecessor in compliance with COVID-19 preventive protocols, said they were both sons of Edo with interest of the state at heart.

The governor also hinted that the zonal congress of the Peoples Democratic Party (PDP), which was earlier scheduled to hold yesterday, has been postponed due to the local government elections that took place in Delta State.

“The Zonal Congress, which was to hold today has been postponed to Tuesday and it’s a normal routine to satisfy the party’s constitution. There is nothing amiss,” he added.

On his part, Oshiomhole, who was a guest at the event, hailed his successor, Governor Obaseki, describing him as ‘his brother and friend.’
Oshiomhole stated: “Once the governor speaks, the matter ends. The governor knows that pensioners here might not be able to do much, that is why he said every other thing required to complete the hostel of the Catholic School of Nursing and Midwifery in Uzairue, his government will do.”