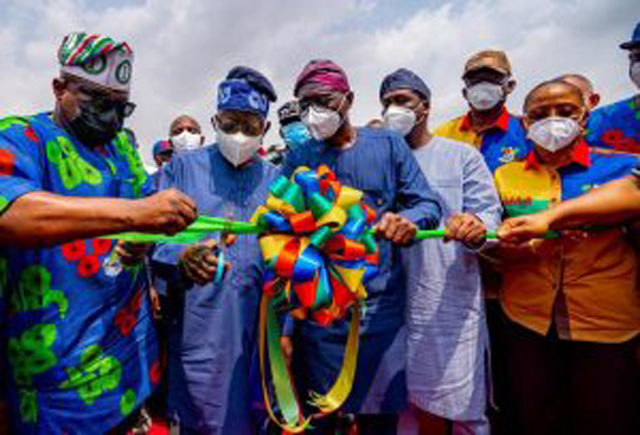 The National Leader of the All Progressives Congress (APC), Asiwaju Bola Tinubu, has urged youths in Agege and Lagos in general embrace peace and avoid thuggery.

Tinubu gave the advice on Friday during the inauguration of the 1.4 km flyover at the Pen Cinema junction, Agege.

He urged them to embrace peace for prosperity of the area.

According to him, no meaningful development can be achieved in an atmosphere of insecurity, hence, the need to embrace peace at all times.

The National Leader commended the Lagos State Governor, Babajide Sanwo-Olu, and his cabinet for putting the state on the path to progress.

He praised them for being steadfast even during the COVID-19 pandemic and EndSARS mayhem.

”Instead of showing frustration, you have showcased where there is a focused government, no matter the turbulence you run into, you can bring prosperity.

”We thank you for not letting us down and for being who you are and what we believed you were before election,” Tinubu said.

He said that though some party followers doubted the capability of Sanwo-Olu when he was chosen as the governorship candidate of the party in 2018, his performances since he became governor had proven doubters wrong.

According to him, the ship of the state in 2017-2018 seemed to have been geared toward the wrong direction but Sanwo-Olu turned it round as the captain with his deputy, Dr Obafemi Hamzat.

”We thank this administration for not letting us down, we thank you for being who you are and who we think you were even before the election.

”Ever since Babajide Sanwo-Olu became the captain of the ship of our state, he has turned it right for progress and development and shown good leadership.

”Those of you at the cabinet have developed an equal determination to develop and rebuild for the people of Lagos state,” he said.

Tinubu said that the current administration was a team of great performers and doers, who were capable of building Lagos back to progress.

”I am elated that Lagos has become a huge construction site. I recognise and commend the harmony between the Executive and the Legislature that has brought much development to the state.

”In APC, we seek for talents and we don’t destroy them, we prune them and watch them grow and perform satisfactorily.

”As a government, you have shown commitment even in the face of the pandemic. The road (Agege Flyover) will bring development and good life.

“The youth, l encourage you to avoid thuggery and destruction. Government has given you education to reach greater heights,” Tinubu said.