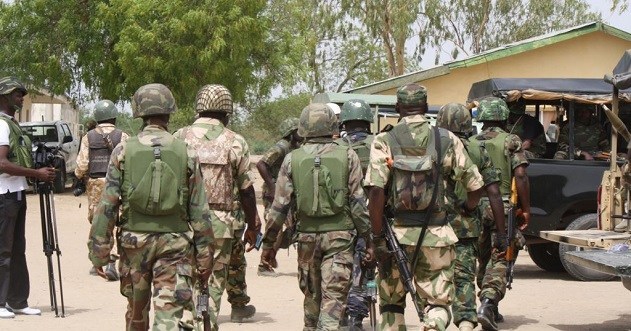 The Nigerian Army has revealed that 12 officers and 86 soldiers absconded from the frontlines in the aftermath of last week’s Boko Haram attacks on Marte and Dikwa local government areas of Borno State.

This was contained in a memo dated March 1, 2021, from Operation Lafiya Dole Headquarters in Maiduguri.

According to a report by Daily Trust, the soldiers were declared deserters.

It indicated that three majors, three captains, six lieutenants, three sergeants, and 89 soldiers fled in the aftermath of the attacks on Marte and Dikwa.

The signal, signed by Col. A.O. Odubiyi, on behalf of the Theatre Commander of Operation Lafiya Dole, partly read, “I am directed to connect Reference A on above subject and to respectfully forward details of additional officers and soldiers who absconded from the defensive location during the BHT attack on New Marte and Dikwa.

“You are requested to declare the named officers and soldiers’ deserters WEF 19 Feb 21. You are also requested to cause HQ NAFC to freeze their accounts and apprehend/bring them under military escort to this Headquarters if seen within your AOR.”

Ripples Nigeria had reported that Boko Haram fighters dislodged Nigerian troops in Marte on February 14, prompting the troops to relocate to Dikwa.

The insurgents reportedly foisted their flags at the Marte area after killing seven soldiers of the 153rd Task Force Battalion.

Thereafter, the terrorists waged another war against the troops in Dikwa on February 19 but were repelled.

In response, the Chief of Army Staff, Maj.-Gen. Ibrahim Attahiru went to Dikwa and gave a 48-hour ultimatum to the troops to recapture Marte and other towns which they did.

However, an anonymous military source told Daily Trust that the case of the 101 soldiers that deserted was a source of concern.

“This case should not be seen as mutiny because they went different ways when they were dislodged by the insurgents. It is possible that some of them have been killed; some may have retreated to their main bases and others may be on the run.

“This is not a new thing. It happens when military bases are dislodged,” he said.

Another military source familiar with the recent development said most of the deserters left in protest because the terrorists had superior weapons and not because they didn’t want to continue serving their country.

“The fact is that the weapons procured by the federal government between 2013 and 2014 have all worn out while others have been stolen by the terrorists during raids on military bases.

“Also, the terrorists have procured additional weapons from other sources which they are now using to take the war to the doorsteps of our troops.

“The terrorists also believe that they are fighting a religious battle and therefore are ready to fight all the time, confronting the troops with the conviction that they would either win or die. All these factors have collectively dampened the morale of our troops and the federal government must do something to revive it,” he said.