Governor Bello Matawalle of Zamfara state has said no ransom was paid to secure the release of the abducted students of the Government Secondary School in Jangebe, Zamfara state.

While speaking during an interview on Channels Television’s Politics Today Programme on Wednesday, the Governor said that his administration received the students after engaging the bandits.

He said, “There is nothing in exchange for the release; we use those (bandits) that are repented. When we use them, they engage them and I said they should ask them why they did that?” he asked.

“Some of these guys did not accept our peace accord, they are many. Some of them even refused to show their faces to the government. But those that have a good intention of repenting and coming back to society, they are working with the security agencies to make sure that the state is safe.”

Mattawalle who said that he lost sleep within the period, added that he was extremely happy with the release of the students.

“I am very happy with the situation; I can’t measure how happy I was at that moment. On that very day, I did not sleep because they left Gusau around 11 am in the morning to the area where the children were kept.

“They did not come back to the state capital till after 4 am in the morning which we were all waiting for them in the Government House”. Mattawalle said. 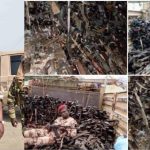