Governor Yahaya Bello of Kogi State has triggered off his campaign of the 2023 presidential race. The Kogi State Governor at the weekend visited former President Olusegun Obasanjo in Abeokuta, Ogun State, to solicit his endorsement and support for the presidential race.

Governor Bello who is on his second tenure as Kogi State governor on the platform of the All Progressives Congress (APC) took his overtures and lobby to Dr. Obasanjo in his effort to transform his ambition into nationalism posture. Dr. Obasanjo, though, a prominent elder statesman, is not a member of the APC, the party Governor Bello must first secure the ticket for the presidential race. However, Governor Bello may have recognized that former President Obasanjo has over the years been prominent for hosting presidential aspirants and subsequent candidates, who include President Muhammadu Buhari, former Vice President Atiku Abubakar, among others.

Governor Bello would be contesting the APC presidential ticket with the APC national leader, Asiwaju Bola Tinubu, Governor Kayode Fayemi, from the southwest, Senator Orji Uzor Kalu from the southeast, Senator Sani Yerima from Zamfara State, northwest, amongst others. 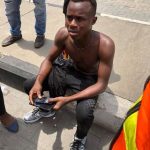 Wilder: I Don’t See Fury As A Champion