A 10-year-old boy has been left  paralyzed and in need of urgent medical attention after he was allegedly shot in the head by suspected Fulani herdsmen in Ebute Igbooro, in Yewa North Local Government Area of Ogun State.

The assailants had attacked different communities across Yewaland earlier this month and killed no fewer than 13 people. Four persons were killed at Ebute-Igbooro and about nine others sustained varying degrees of injury.

The young boy survived the attack but his stepmother and siblings were reportedly among those killed by the attackers.

A social media influencer, Bimbo Cash, who disclosed this on Tuesday, February 25, said the boy is paralyzed as a result of the bullets lodged in his head.

According to her, the boy needs to undergo urgent surgery, adding that about eight bullets are yet to be removed from his head.

“I was at a hospital in Ogun State when the matron dragged me to see a 10-year-old boy shot in the head by Fulani herdsmen. He needs to undergo surgery. 8 pellets (are) still logged in his head and he was in pain,” Ms Bimbo stated.

“They hacked his step mom to death, killed his siblings, 8 months baby and shot his father and several others. His father was taken to another hospital. These guys invaded the Igbooro community at night, moved from one house to another, shooting and macheting people. They killed an 80-year-old,”

“He needs to be operated on as soon as the deposit is made. Government is supposed to take responsibility for this care. I’m angry that the boy is laying there without hope. The boy’s right arm and right leg are paralyzed already, which means the bullets in the brain are affecting other parts of his body.” she explained.

In an update, she disclosed that the Ogun state government has taken over the boy’s case.

“The Ogun state government has contacted me and all necessary information sent to them , They are on top of it and has been taken as a matter of urgency. Thanks to everyone for their tags and concern @dabiodunMFR @SulaiOdus Thanks for the Swift response” 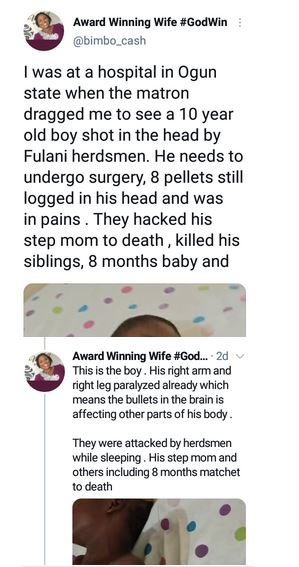