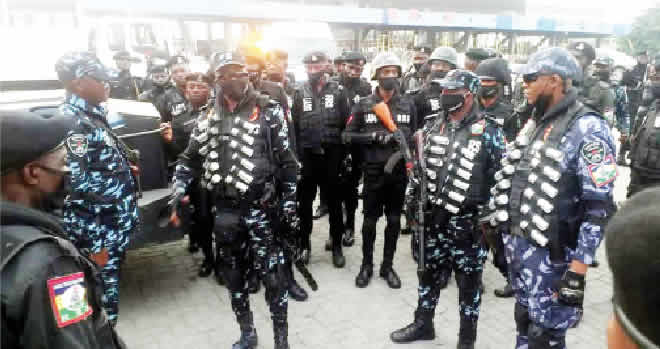 Police officers at Lekki ahead of the protest

It has been reported that very strong condemnations have trailed the detention of six protesters who held a procession to mark the 120th day that soldiers fired live ammunition at #EndSARS protesters at Lekki tollgate.

During the shooting, some protesters reportedly died while others secured varying degrees of injuries.

The PUNCH gathered that those arrested on Saturday are Victoria Oniru, Tokunbo, Tunde Abass, Leon, Omolara Alagbala, and Adekunle.

It was learnt that the protesters had converged on Victoria Island when police officers from Maroko Police Station arrested them.

It was also learnt that the protesters were later transferred to Adeniji Adele Police Station before being detained at Panti.

In a statement, Eti-Osa Bar Forum Legal Aid Clinic and Situation Room for #OccupyLekki demanded the immediate release of the protesters.

The statement titled, ‘#120thDayMemorial: We demand the release of Victoria Oniru and others now’, was signed by the Chairman of the Forum, Oladotun Hassan; and Secretary, Ayo Ademiluyi.

It read in part, “We condemn in particular the role of Maroko Police Station, which have become notorious since the 20th day of October 2020 for police brutality and violation of fundamental human rights.

“We hereby demand the immediate release of the Memorial Walkers and call on everyone to call the Commissioner of Police, Lagos State Police Command, CP Hakeem Odumosu to demand their release.”

Also on Twitter, some youths expressed dissatisfaction with the protester’s arrest, demanding that #BuhariMustGo.

One of them, @Empressni, said, “Arresting, jailing and killing protesters for demanding their rights is the peak of evil. We won’t stop demanding our rights until we are totally free from oppression. Demanding for a country that works for all is not a crime, neither is it too much.”

Yung_captain @CaptYung said, “We aren’t slaves, we are humans too. We deserve a good living. We have the rights to protest. The same people who are supposed to protect us are the ones harming us.”

“When you have a president that breaks the rule of law at will and disobey court orders, the society will degenerate into anarchy,” @Lifeofblazedee tweeted.

“What is the crime of these young Nigerians who walked to honor Lekki victims yesterday?” @buzzcapital wondered.

Kunle Ajayi added, “We have a future to defend. We have a world to build. Another Nigeria is possible and #BuhariMustGo.”

“#ENDSARS demands must be met, all killer police and soldiers must face public trial, SARS and SWAT must be banned, nobody should be tortured or paraded as suspects or culprits,” @ISpeaktheT said.

“Not even the intimidation of the rotten judiciary and stringent bail conditions will discourage us from demanding good governance. Buhari either respects our existence or expects our resistance,” @BossladyFola added.