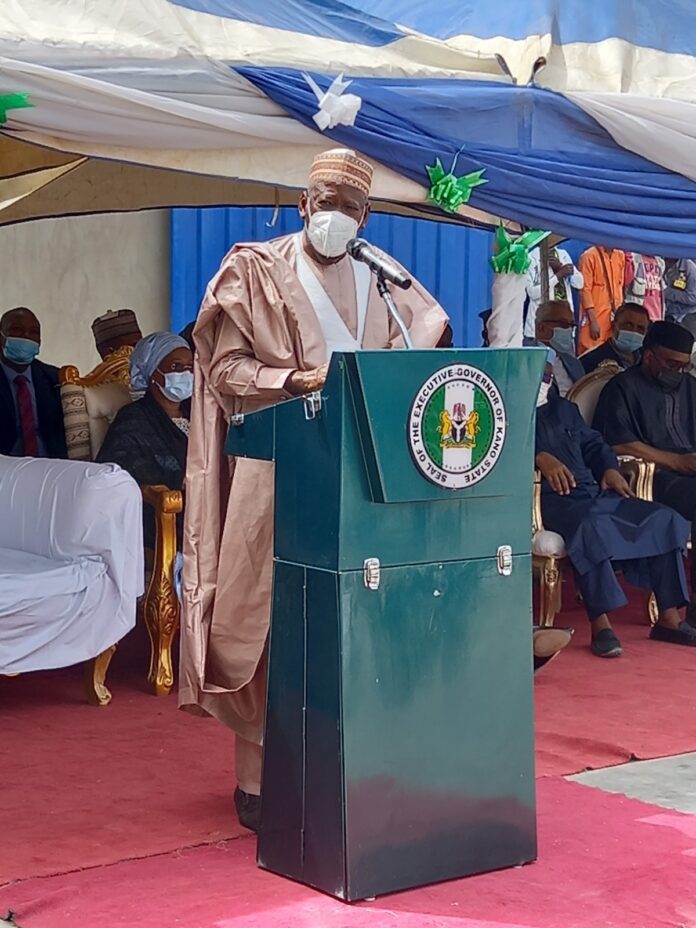 In a unanimous commendation for the effort of the Kano state governor, Dr Abdullahi Umar Ganduje, in creating, securing and promoting ease of doing business environment, Minister of Industry, Trade and Investment, Mr Otumba Richard Oni and his counterpart, the Minister of State in the Ministry, Maryam Yalwa Katagum, appreciated how his administration accorded all the needed support in that direction.

At an official commissioning of Mamuda Food and Confectionery, a subsidiary of Mamuda Group of Companies, at Challawa Industrial area, at the Weekend, they all made it clear how the state government under Dr Ganduje, created good and peaceful atmosphere for businesses to flourish.

They all acknowledged that, “This administration of Dr Abdullahi Umar Ganduje, means business. In making sure that, Kano bounces back in the area of industrialisation. He is doing his best in creating good environment for business to flourish.”

Katagum also called on the people of the state not to relent in making sure that, they benefit from the National Small  and Medium Enterprises Support project, that was meant to empower businesses among Nigerians.

Adding that, “Yes Kano and Lagos states were given higher numbers, looking at their population size. The way Kano state government is responding very positively in creating ease of doing business environment, the state deserves all support.”

In his remarks, governor Ganduje appreciated all the support the state is getting from the federal government under Muhammadu Buhari regime, emphasising that, “If you look at President Muhammadu Buhari’s efforts in pushing many encouraging and viable projects to Kano state, you will agree with me that, Kano has no option than to create opportunities and peaceful atmosphere for businesses to thrive.”

“We are very grateful that President Muhammadu Buhari is giving us all the courage in making, to reality, the industrialisation of our dear state Kano. This, will make the state to bounce back in a very effective and efficient way,” he acknowledged.

Part of the reasons he listed, why he believes that President Buhari means well for the state, in trying to bring back the lost glory of the state, in the area of industrialisation and taking a centre stage as a commercial nerve centre of the North and some neighbouring West African nations, he referred to the recently inaugurated Kano-Kaduna–Abuja Pipeline project (AKK) and Kano-Katsina-Jibia-Maradi rail road project, among others.

Others, as he puts it are “Mega railway stations in Kano, Dambatta and Kazaure. Inland Dry Port project is also another milestone project that could elevate our economic fortunes without any let or hindrance. This should be seen within the purview of the President Muhammadu Buhari’s unrelenting efforts in making Kano Industrialisation project a reality.”

He further hinted that, the sum of over N2 Billion Naira was committed by the state government on the Inland Dry Port project. “Just to make it a reality. We provided road network and the construction of road network in some parts of the general area is still ongoing. We are also hoping that, this project will be commissioned at the end of this year,” he reveals.

The governor further encouraged that, “We will continue providing security in the state, so that our businesses will continue to thrive. This means a lot in the development of our dear state and the country in general.

“We spoke with many Airlines, for example Emirates Airline were here many times indicating their readiness to start operation from Kano end. It was as result of that, that we did some work to improve the security architecture at the Airport. We improved the scanning system at some identified points. We also improved the security system of the main Gate,” he disclosed.

On his part the National President of the Manufacturers Association of Nigeria (MAN), Engineer Mansur Ahmad appreciated state government’s special focus and support to businesses, with the good support of the federal government.

“We dearly appreciate Kano state government effort in providing secured environment for our businesses to flourish. While right policies are advanced and used, for the private sector to flourish, the use of local content is another area our governments are trying,” he commended.